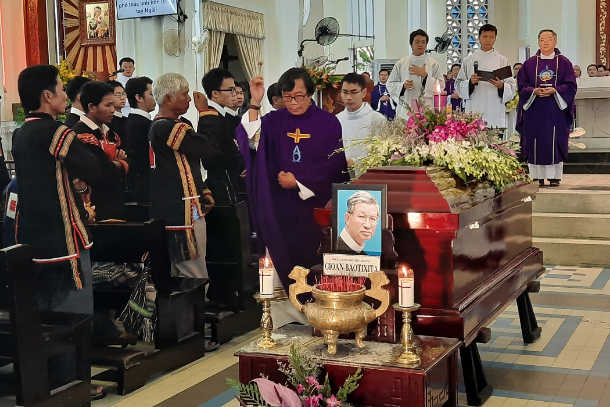 A priest sprinkles holy water on the coffin of John Baptist Nguyen Van Phan at Our Lady of Perpetual Help Church in Ho Chi Minh City on Jan. 13. (ucanews photo)

Catholics from ethnic groups in Vietnam’s central highlands are mourning the death of a Redemptorist priest who dedicated his life to improving their spiritual and material well-being.

Hundreds turned out on Jan. 13, for the funeral of Redemptorist Father John Baptist Nguyen Van Phan at the Our Lady of Perpetual Help Church in Ho Chi Minh City.

Father Phan, 84, died at the nearby House for Retired Priests on Jan. 10.

He described Father Phan as an active missionary who introduced Catholicism to ethnic Jarai people in Gia Lai province and guided them through difficult times at the end of the Vietnam War.

Father Anthony Le Ngoc Thanh, who worked with the late priest for years, said Father Phan began his mission in the highlands in 1971 and worked with a group of Jarai people to translate the New Testament into their ethnic language for years.

Thanks to the translation, many Jarai people were able to read and study the Bible giving them the strength to remain Catholic long after the 1975 reunification of the country under communist rule.

At that time, Redemptorists only lived among Jarai villagers to help them cultivate crops, and learn their language and customs because they were banned from evangelization.

Father Thanh said Father Phan and other Redemptorists, however, encouraged villagers to evangelize their relatives.

As a result, local people started to embrace Catholicism in the late 1980s and in 2005, some 15,000 people from 150 villages in the province were baptized.

Several Jarai people, who traveled from Gia Lai province for the funeral, prayed and offered incense in front of his coffin.

“He brought God to us and gave loving care to those who were sick or suffering difficulties,” said Thomas Rcom Hon, 28, an ethnic Jarai villager who added that 45 people from his village attended Father Phan’s funeral.

Philip Ksor, 61, who embraced Catholicism in 1986, said the dead priest “lived a simple and humble life, was friendly, and willing to share difficulties with us.”

“His death was a great blow to our parish. We will pray for him to be in heaven and try to live out our faith the way he would want us to,” said Ksor, who is from Bon Ama Djong parish in Gia Lai province.

After the funeral, Father Phan’s body was cremated and his ashes will be placed at Cheoreo Evangelization Center in Gia Lai province.