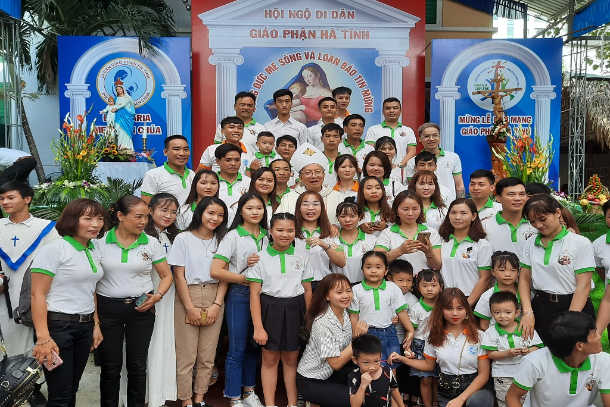 Thousands of domestic migrants in Vietnam’s largest city have been inspired with ways of telling Jesus’ stories to evangelize other people.

More than 2,000 migrant workers and students from the two northern central provinces of Ha Tinh and Quang Binh attended a gathering in Ho Chi Minh City on Jan. 5.

The event was organized for the first time by Ha Tinh Diocese, which was separated from Vinh Diocese and established in December 2018. The diocese covers the two provinces.

Dominican Sister Mary Nguyen Thi Hong Que, a main speaker at the gathering themed “Together with Mary we live and spread the Good News,” said evangelization involves not only clergy and religious but also laypeople who have duties to bring Christian values to other people.

“Today you should take part in evangelization work by telling biblical stories to people around you as my group members do,” said Sister Que, 50, who leads a group of 43 young people who study the Bible and tell its stories to other people.

“Telling stories from the Bible to others is an effective way to help people to know about God and feel that they deserve to be loved by him.”

Mary Dang Thi Mai Hien, who works with autistic children, said her students change their attitudes to their friends and teachers after she tells them biblical stories.

“They are interested in the stories and they become friendly towards me and other people,” Hien, 26, said. “Some students asked their parents to tell those stories to them at home.”

Therese Nguyen Hoang Phuong Khanh, 31, said that when she visits her father, who used to be a public security officer and is serving a jail sentence, she tells him a Bible story.

“My father is deeply moved by stories and reminds me to tell them to him on my next visit,” Khanh said in a low voice.

Khanh, who works for a law company, also tells the story the Parable of the Lost Sheep to a young woman whose father is in prison. The woman feels hatred for her father. “I am happy that she changed her mind and forgave her father,” she said.

Paul Tran Khac Oai said group members study the Bible and learn story-telling ways from one another on a weekly basis at a convent.

“We try to select stories that are suitable for listeners’ situations. For example, the Parable of the Lost Sheep inspires penance, tolerance and forgiveness in people,” the 23-year-old industrial designer said.

Mary Nguyen Thi Minh Nguyet, a participant, said she is interested in stories and inspired to partake in evangelization.

“I will join groups who share God’s Word so that I can tell Jesus’ stories to people I meet,” Nguyet, who works for a medicine company, told ucanews.

The mother of four, who moved to the city 15 years ago, said in the past she thought evangelization was only a task for clergy.

Nguyen said now she and other migrant workers gather each week to say prayers at their houses and pray for patients at a public hospital.

“I feel duty bound to work with the Church to spread the Catholic faith by telling biblical stories to other people,” she said.

telling biblical stories is one of the evangelization activities the diocese promotes among migrants in the city, which is home to 20,000 migrants from the two provinces served by Ha Tinh Diocese.