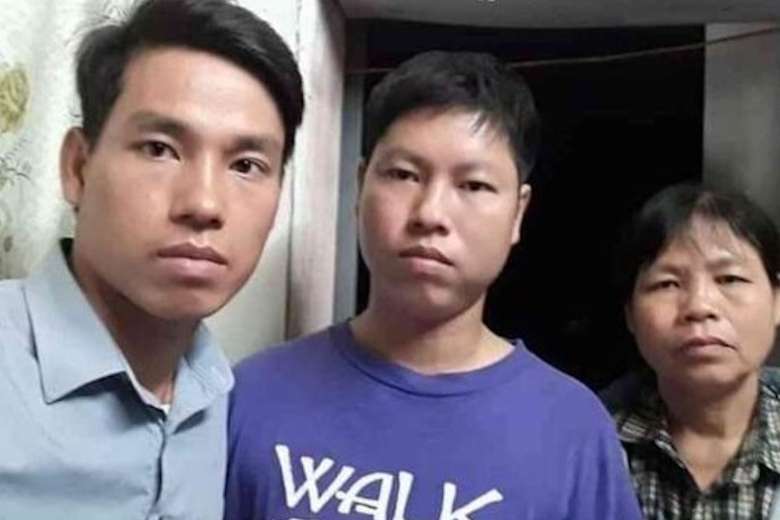 Trinh Ba Phuong (left), Trinh Ba Tu and their mother Can Thi Theu before their arrest in June 2020. (Photo supplied)

A well-known female activist and her son, who both help victims of forcible evictions in northern Vietnam, are set to stand trial for an alleged anti-state campaign as part of the government’s crackdown on dissidents.

Can Thi Theu and her son Trinh Ba Tu will be put on trial on May 5 at the People’s Court in Hoa Binh province for making, storing or spreading information, materials or items for the purpose of opposing the state, Theu’s daughter Trinh Thi Thao said.

“My mother and brother just speak out against the injustices of the government and wish the country better,” Thao said.

She asked the government to free her relatives, who insist they did nothing wrong.

Theu, who was previously imprisoned twice for helping evicted farmers, wrote a letter to her family from a prison in Hoa Binh where she and her son are being detained,

Those who violate the law are authoritarian, corrupt officials who are destroying our nation

“My family and I are entirely innocent. Those who violate the law are authoritarian, corrupt officials who are destroying our nation. I never fear vile repression by the government but I remain clearly determined to fight for the people’s democratic and human rights to be exercised and respected,” she wrote.

Tu said he and his mother have kept their right to silence and will reject any accusations against them.

“I went on hunger strike for 20 days to protest the government’s crackdown on the people,” he said.

Theu and her sons Tu and Trinh Ba Phuong were arrested in June 2020 after they had spoken about a brutal police attack on farmers in Dong Tam commune on the outskirts of Hanoi in early 2020.

The defendants were accused of affecting the political system by reporting the attack to the public on social media and to foreign diplomats.

Phuong, who was detained just a few weeks his wife gave birth to a baby, said he wished local people and foreign diplomats would pay attention to 29 detained farmers from Dong Tam. Two were sentenced to death and another was given a life sentence last September.

Phuong, 36, and another detained land activist, Nguyen Thi Tam, are under investigation in another case by Hanoi police.

Phuong’s wife Do Thi Thu She called on their supporters to attend the upcoming trial.

Lawyer Le Van Luan said he met Theu and Tu in jail on April 19 and they were in good health and spirits.

He said they strongly denied the accusations of using social media to campaign against the state.

Land disputes between local authorities and people including religious groups are rampant in Vietnam, where private ownership of land is not recognized.

On April 12, hundreds of Catholics from An Hoa Parish in Da Nang gathered to pray for officials to return land that had been confiscated from them illegally.