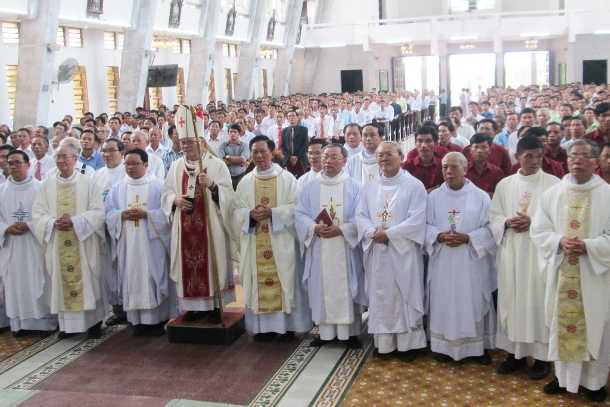 Male heads of Catholic families in central Vietnam have been asked to look after their families and weather the impact of Covid-19.

More than 1,000 heads of families in Hue Archdiocese made a pilgrimage to Phu Cam Cathedral in Hue on July 1 as part of ceremonies to observe the 170th anniversary of the archdiocese’s establishment.

Archbishop Joseph Nguyen Chi Linh of Hue said the gathering aimed at encouraging family proprietors to defend their families during the Covid-19 crisis.

The Ministry of Labour, War Invalids and Social Affairs recorded 7.8 million people had lost their jobs or reduced working hours, while 17.6 million others have seen their income drop due to the lockdown to contain the Covid-19 outbreak.

“You should follow the examples of St. Joseph by trusting in God and receiving strength from the Holy Spirit to defend your spouses and children from family problems,” the prelate said. St. Joseph is the patron of the local Heads of Catholic Family Association.

Father Phi said a 70-year-old father abandoned his faith life for 40 years because he was dissatisfied with his parish priest who disrespected laypeople.

The priest said the man and his wife went on a pilgrimage to the National Shrine of Our Lady of La Vang in 2017 but he refused to go to confession until he met Father Phi, who waved to him.

“The man returned to the church and I am sure that he will reconcile himself with his family members and others,” the priest told the congregation.

Joseph Nguyen Van Phat from Vinh Hien parish in Thua Thien Hue province said that after the government lifted social distancing measures in late May, most local people found themselves jobless, facing financial woes and having to borrow money from loan sharks at very high rates of interest.

Phat, a 78-year-old fisherman, said fishermen do not dare fish at sea for fear of being attacked by Chinese vessels. He said families who face economic problems will easily suffer family failures if they do not trust in God.

Archbishop Linh said many local Catholics have moved to other places in search of jobs in recent years. As a result, the archdiocese’s Catholic population decreased from 70,000 in 2015 to 60,000 this year.

John Baptist Nguyen Dinh Hoang, a leader of local households, said they promised to cement their faith life by gathering for daily prayers, setting good examples to their children and doing charitable work for others in need.