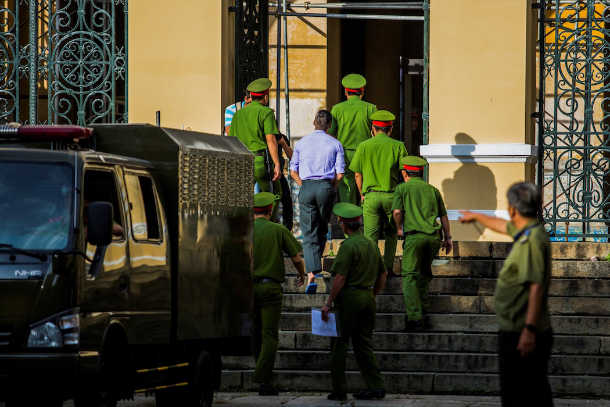 American-Vietnamese citizen William Nguyen (C-back to camera) is escorted by policemen to a courtroom for his trial in Ho Chi Minh City on July 20. The court held a closed-door trial against Nguyen for "causing public disorder" at protests in the country's southern business hub in June.  More recently a court on sent 15 other protesters to prison on July 30. (Photo by AFP)

A court in southern Vietnam has jailed 15 protesters including Catholics who joined nationwide protests against a new cybersecurity law and a draft law on special economic zones.

The newspaper said 13 other defendants were jailed for 8-10 months, while five others were given 12-14 months' probation as they need to take care of their children.

Many of the defendants are Catholics from Xuan Loc, the country's largest diocese in terms of population.

All defendants were convicted of causing public disorder, holding up banners, shouting slogans, inciting others to protest and blocking traffic for hours on June 10 at the protest in Bien Hoa, the capital of Dong Nai province.

They opposed the cybersecurity law and controversial draft law on the establishment of three new special economic zones that they fear will be controlled by Chinese investors.

Eyewitnesses said relatives of some defendants were not allowed to enter the court building guarded by police and no lawyers defended them at court. They have not been told about the defendants' detention and trial.

Father Joseph Nguyen Duy Tan, pastor of Tho Hoa parish in Dong Nai province, said: "The sentences are inhumane and take away the right to demonstration of citizens."

He said the defendants staged the demonstration peacefully to express their patriotism and political views and did not cause public disorder.

"Demonstration is good for the government to know the people's opinion," he said in a video clip.

The priest called on Vietnam's communist government to enact a law on demonstrations soon so that people can exercise their rights to be masters of the nation.

Father Anthony Le Ngoc Thanh, an advocate of human rights, said demonstrating is citizens' right under the constitution. "The judges and police violated the constitution when they convicted the defendants of causing public disorder. They fight against the communist government."

Tens of thousands of people throughout the country took to streets and public areas on June 10 for the protests. Many were detained and sentenced for causing public disorder, with 16 protesters in Binh Thuan jailed for up to three and a half years.

William Nguyen, a Vietnamese-American protester, was tried in Ho Chi Minh City on July 20 and then deported to the United States.

Vietnam has delayed the passing of a law on demonstrations several times, so any act of inciting public protests is deemed illegal.

On July 16, the Ministry of Information and Communications suspended state-run Tuoitre online newspaper for three months for quoting President Tran Dai Quang as saying he agreed with the need for a demonstration law and would report this to the National Assembly.