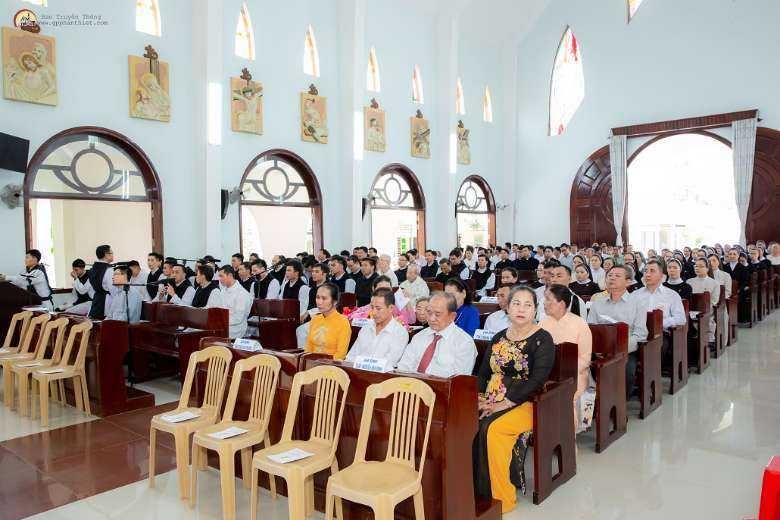 People attend a Mass at the Cistercian Monastery of Chau Thuy in 2020. (Photo: hoidongxitothanhgia.com)

A Vietnamese Cistercian who joined a Christian sect, which is not in communion with the Catholic Church, has been dismissed by his monastery.

Cistercian Father Joseph Hoang Van Thang, from the Cistercians of Chau Thuy in Binh Thuan province, said on May 16 that Brother Mary Martin Tran Minh Diep's dismissal followed an investigation into his activities during and after a study trip to the United States.

Concerns began when Brother Diep broke contact with the monastery between 2016 to 2019, Father Thang said.

The monastery's superior later made contact with him but failed to persuade him to return as he gave various reasons not to, Father Thang added.

However, Diep was recently seen serving as a Catholic priest and celebrating Mass in several places in Vietnam., said Father Thang, who is the deputy superior at the monastery.

The priest said on close investigation they found that Diep was ordained a priest by Bishop Allen Jones of Vancouver Island, a diocese run by the Catholic Apostolic Church in Canada, which is not in communion with the Roman Catholic Church.

He said the Catholic Apostolic Church had announced on social media that Diep was ordained to the priesthood on Sept. 30, 2018.

The Catholic Apostolic Church is from the independent Old Catholic Church that was founded in 1871 in Germany. It accepts certain Anglican elements.

“[As such] according to canon law and the Cistercian constitution, we declare that Brother Diep has never been ordained a priest by the Catholic Church and he is dismissed from the monastery,” Father Thang said in a statement issued on May 16.

“Brother Diep is no longer a Cistercian in the Cistercian Monastery of Chau Thuy and we bear no responsibility for his life and work,” the statement said.

Father Thang also called on Catholics to inform local parish priests and ordinaries about Brother Diep in case they catch him celebrating the Sacraments according to Catholic rites.

As Cistercians have little contact with outsiders, superiors of monasteries in Vietnam publicly announce the abandonment or dismissal of some members. Other cases are not announced.

In 2021, the Monastery of Chau Thuy said that Catholics should be careful about religious activities relating to the former Cistercian La Salle Nguyen Cong Diep, who left the monastery two years earlier.