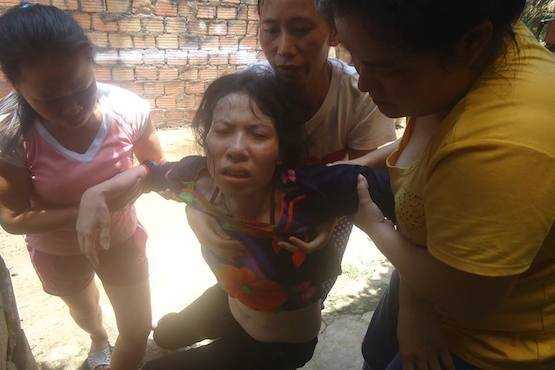 An injured Tran Thi Hong is taken to her home by neighbors after police arrested and allegedly tortured her on April 14. The activist alleges a new round of torture at the hands of Vietnamese police from May 10-20. (Photo courtesy of Nguyen Ngoc Lua)

A Vietnamese Christian activist, who was detained and allegedly beaten by police in April, said she was tortured again by police over an 11-day period in May.

"Officials and police tortured and interrogated me constantly for 11 days," said Tran Thi Hong, the wife of an imprisoned Lutheran minister and a member of Vietnamese Women for Human Rights.

She said she was continually beaten and knocked unconscious, being provided with medical care to help her regain consciousness, only have to police knock her out again.

Hong said she was transported daily to police headquarters in Hoa Lu Ward in Pleiku City in Vietnam’s central highlands for interrogation from May 10-20.

"I was treated like an animal. I opposed their violent acts by going on hunger strike for nine days and they stopped working on me last Friday," Hong told ucanews.com.

The 36-year-old mother of four said she had just resumed eating rice porridge and is being treated for heart disease. "I am in poor health and lying in bed all the time," she said.

Hong said officials tried to force her to admit to illegally meeting a U.S. delegation on religious freedom on March 30 without government permission. They also said she belongs to an outlawed Protestant denomination.

"I told them that 'I will never admit to your charges even if you beat me to death," she said. "I am a full civilian. I have rights to travel and meet all people I want to and tell them what I suffer, see and witness."

She also told officials that her denomination existed long before the establishment of the Vietnam's Communist Party. "Why did you ask us for a permit," she said she asked them.

"We have rights of freedom of faith practice," she said, adding that government officials were enraged by her statement.

Her husband, Lutheran Pastor Nguyen Cong Chinh, had led the denomination that is popular among ethnic minority groups before he was sentenced to 11 years in prison in 2012 for conducting campaigns against the communist government and "undermining national unity."

Hong said many Christian ethnics went on hunger strike in prison to protest torture and mistreatment by jail guards.

She said plainclothes police have stationed themselves in front of her home, cutting off her Internet line to prevent her from communicating with other people.

"Our struggle for religious freedom has still a long and hard road ahead. We need prayers and support from all people in the country and the international community," she said.