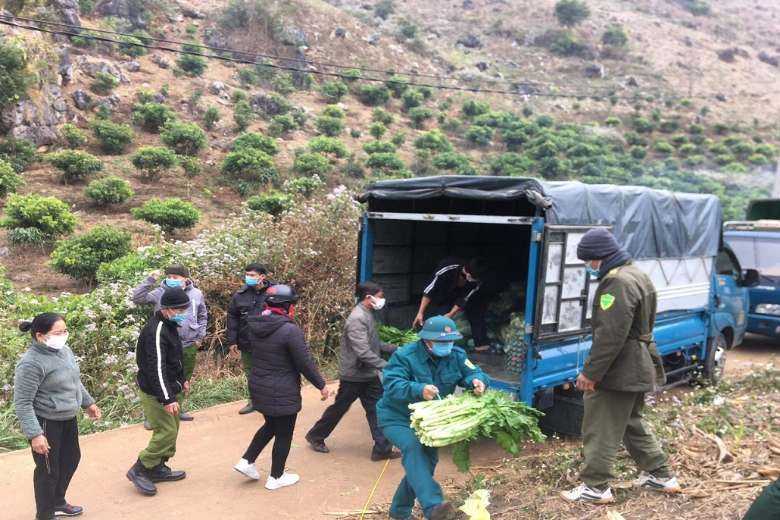 Volunteers unload food packages at a checkpoint before the authorities deliver them to Covid-19 victims at Phieng Hinh hamlet in Son La province on Dec. 29. (Photo supplied)

The contagion broke out again in many villages and communes in the mountainous province of Son La in late December.

Father Joseph Nguyen Tien Lien, pastor of Mai Yen Parish based in Mai Son district of Son La province, said Hmong people are badly affected by travel restrictions as they work on farms and collect vegetables from forests for a living.

He said the gifts worth 37 million dong (US$1,630) were donated by benefactors and priests from other places.

The hamlet with a population of some 450 Hmong people has been isolated from others since Dec. 26 after over 120 people were infected with Covid-19.

Police set up checkpoints on paths leading to the hamlet and few people could enter the pandemic-stricken area.

“We had to give the gifts to village authorities so that they could offer them to the victims as we could not approach them,” the priest said, adding that half of local people might be infected with the contagion as they do not know how to protect themselves from the virus.

He said local people, who are non-Catholic, suffer from a lack of basic food and clothes and live in ramshackle huts.

“We are quite delighted to help the victims to overcome the health crisis although they are not Catholic,” said the priest, who is active in doing charitable work and evangelization among ethnic groups.

Father Lien, who was assigned to the parish in 2017, said he and volunteers gave emergency relief to 47 Hmong households in Pao Cua hamlet in Yen Chau district. The hamlet is 24 kilometers from the church.

Each household received 10 kilos of rice, one package of instant noodles, one kilo of pork, 10 eggs, one bottle of fish sauce and masks.

The priest said they also had to give the aid to local authorities so that they could pass them to the victims. The hamlet has been isolated from others since Dec. 27 after the first local people were infected 10 days earlier.

He said the pandemic spread from the hamlets of Pao Cua and Phieng Hinh to other hamlets and villages occupied by Hmong people.

“We will try our best to provide the victims with more basic food until movement restrictions are lifted and they can go out to work,” he said.

Lan, a mother of three, said most ethnic families lack food and clothes around the year and depend on church donations. They ask priests for money to pay for their medical treatment at public hospitals, to repair their huts and cover their children’s school fees.

She said the priests also run two hostels for 200 Hmong students who study at public schools. They have to ask for rice, vegetables and other donations from local people to feed the students as benefactors have reduced financial support due to the prolonged pandemic.

She said the pandemic flared up again in northwestern provinces after many people who worked away from home got Covid-19 and infected their villages. They returned home to celebrate the New Year from southern provinces and neighboring Laos and China.

Dien Bien and Son La provinces are home to various ethnic groups who live in poverty and have limited access to education, health care and other public services.