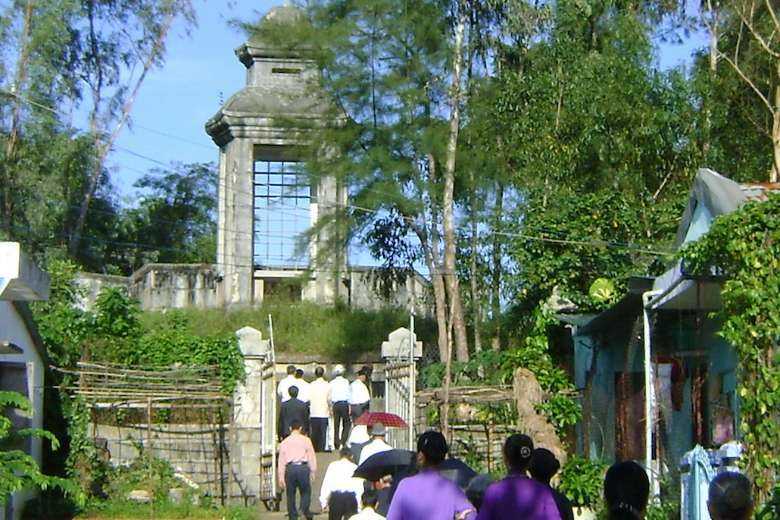 Stephanus Nguyen Van Bang and other people attended the Feast of All Souls at Phu Cam Cathedral in Hue.

They offered incense and prayed in front of the tomb of Michael Ngo Dinh Kha at Phu Cam Parish cemetery on Nov. 2. Kha was the father of the late John Baptist Ngo Dinh Diem, the first Catholic president of the former South Vietnam.

“We visit the tombs of our ancestors and those who helped us in hard times and pray for them in November as a way to owe a debt of gratitude,” said Bang, who is from Huong Thuy district of Thua Thien Hue province.

The septuagenarian farmer said they yearly take a bus to visit Diem’s tomb in Lai Thieu cemetery in Binh Duong province near Ho Chi Minh City, but this year they could not afford to get there due to travel restrictions to contain the Covid-19 pandemic.

He said his parents and Diem’s family were from the same village of Dai Phong in Quang Binh province. They accompanied other villagers who left their homes for Hue during the 1954 exodus when an estimated one million people fled from the communist-controlled north to the south.

“We were granted 10,000 square meters of land for each family to resettle and grow flowers for a living. We have been living here since then,” Bang said.

We are taught that when eating fruit, remember those who have planted the tree, so we are not afraid

Bang recalled that elementary students including him in Hue were offered cake and congratulations from President Diem during the traditional Mid-Autumn Festival.

He said his family mourned Diem’s death when they heard he was killed during a coup in 1963. The president and his beloved younger brother James Ngo Dinh Nhu were assassinated on Nov. 2 and buried in the cemetery.

After 1975, when Vietnam was reunified under communist rule, his father was kept in a re-education camp for six months for hanging a picture of Diem in his house.

“We have a better life thanks to government policies for refugees made by the Diem administration. We are taught that when eating fruit, remember those who have planted the tree, so we are not afraid,” the father of three said.

Bang said his family submit Mass intention requests for him and his family on All Souls’ Day and hang his picture in the house.

Research student Peter Cao Xuan Thinh said he prayed and offered incense at the tomb of Kha to express his deep gratitude to the founder of Quoc Hoc High School for the Gifted, where he used to study. Kha was also the first principal of the 125-year-old school.

Catholics also visited the old building where the late Cardinal Francis Xavier Nguyen Van Thuan, a nephew of President Diem, spent his childhood. The building keeps artifacts and pictures of the cardinal and his family.

Luc, 80, said the coronavirus meant that they met in small groups this year to offer incense and say prayers before their ancestors’ tombs.

They also visit the tomb of St. Paul Tong Viet Buong, a military officer who was killed for his faith in 1833. The member of Phu Cam Parish, who was beatified in 1900 and canonized in 1988, is among 16 martyrs of Hue Archdiocese.

“We are fiendishly proud of our saint who bravely bore witness to the Good News, and we pray to him to support our faith in our life,” Luc said.

Ignatius Nguyen Duy Quoc and nine other members of the charity association based in Nuoc Ngot Parish offered a bouquet of red roses and incense on the tomb of Father Tong Van Vinh and 44 laypeople who were burned to death for their Catholic faith in 1883.

“We recite Our Father and the Creed and pray to our saints to protect the parish from the Covid-19 pandemic,” Quoc said, adding that local Catholics ascribed their safety and survival from wars and annual natural disasters to the martyrs.

The 68-year-old father said this year the parish could not hold a Mass at its cemetery due to coronavirus health measures.

“We will visit the tombs of our dead relatives during the month to pray for them to be in heaven and ask them to appeal to God to give grace to us,” he said.

Father Joseph Nguyen Van Chanh, pastor of Gia Hoi Parish, said local Catholics pay much attention to respecting and praying for the dead on All Souls’ Day and the whole of November to show great gratitude to their ancestors and those who did good things for them.

Father Chanh, who celebrated three Masses on Nov. 2, said the local church also observes the second day of the lunar new year or Tet festival to pray for ancestors as a way of bringing Christian values into indigenous traditions.

Catholics also pray for their dead relatives when they attend daily Masses around the year.

“Catholics maintain the national tradition of ancestor worship that is their mandatory duty and complies with Christian teaching,” Father Chanh said, adding that in the past many people thought embracing Catholicism meant abandoning their ancestors.