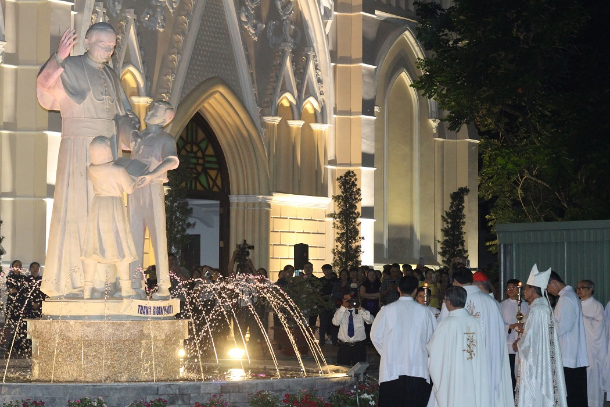 People pray in front of a new statue of St. Pope John Paul at the pastoral center in Ho Chi Minh City on Oct. 22. (Photo by Mary Vu/ucanews)

Catholics in a southern archdiocese in Vietnam have been asked to follow the example of St. Pope John Paul II in broadening knowledge and deepening spirituality in serving the Church.

The call came at a special Mass attended by hundreds of people to celebrate the feast of St. Pope John Paul at Ho Chi Minh City’s pastoral center on Oct. 22.

Bishop Peter Nguyen Van Kham of My Tho presided at the Mass, which also marked the 15th anniversary of the establishment of the center.

Cardinal Man blessed and offered incense in front of a new three-meter-high statue of St. Pope John Paul in the compound of the center. The saint is the patron of the most active and largest pastoral center in Vietnam. Bishop Kham, who served as the center’s first rector, said knowledge, spirituality and ministry played the most prominent roles throughout the late pope’s life.

The 67-year-old prelate said Pope John Paul II, who devoted himself to prayer and Mother Mary, was a great intellectual who taught at Catholic colleges in his native Poland and met with and listened to other intellectuals about the many issues facing their lives.

He said the late pope also initiated various pastoral activities for youths and families and to encourage interfaith dialogue.

He said the saint organized the first World Youth Day, which now attracts huge numbers of young Catholics from around the world, helping them experience church life and discover that the Church accompanies them closely in their faith. Those activities have drawn many to priestly and religious vocations, the bishop added.

Bishop Kham asked attendees of the special Mass to pray hard for priests, religious and laypeople who work at the center and to seriously contemplate following the late pope’s example in the way they orient their lives and any service they may wish to provide.

He urged participants to revisit the pope’s messages, which may help deepen their faith and social activities. “You should broaden your knowledge to love and serve people as the saint did,” he said.

The first-ever prayer meeting at the pastoral center was held in April 2005 and attended by 5,000 people to mourn the pope’s death.

Father Peter Nguyen Van Hien, the center’s rector, said the center aims to train laypeople to serve parishes and bear witness to the Good News in their daily lives.

Father Hien said that he hopes lay Catholics, not clergy, will one day lead the center, which offers courses on the Bible, theology, evangelization, church music and foreign languages, among others.

She said she follows the saint’s example by reciting the Divine Mercy daily for peace and love in the world. “When we know how to forgive and respect other people, we will avoid harming one another,” the mother of 10 said.

Joseph Nguyen Ngoc Dung, from Ho Chi Minh City, said he is inspired by the late pope to serve other people.

Dung said the Church had helped him kick a drug habit. “I abandoned drugs after joining a Divine Mercy group. Now I try to help other drug abusers to stop using drugs,” he said.