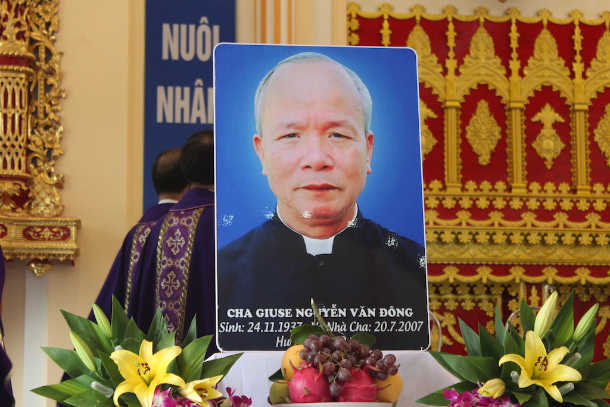 Many priests, religious and lay Catholics in northern Vietnam have paid tribute to a late priest who helped train young clerics, built church facilities and lived a life of selfless service to communities in hard times.

Father Dong, who was ordained in 1973, was hospitalized due to flu symptoms and died after being injected with the wrong medicine in 2007. He was 69.

Father Den, 47, said the celebration aimed to remind local Catholics of to express their gratitude to the late priest, who spent his life tending to the pastoral needs of Catholics and building many churches, parish houses and catechism schools.

Father Dong served some 20 parishes in Phu Tho province from the 1970s to the ‘90s when Hung Hoa Diocese, covering 10 provinces, suffered religious restrictions and had only 17 elderly priests.

Father Den, who lived with Father Dong for 18 years, said the late priest gathered and trained many young people with priestly and religious vocations before sending them to seminaries in other dioceses. The local Church then had no seminaries or houses of study.

“Now there are 14 priests, 70 nuns from various congregations and 50 others who got married and serve the Church well,” he told UCA News.

“I learned patience and the spirit of self-help and self-improvement from him. Now as a parish priest, I try to follow his example in building facilities and give loving care to Catholics,” he said, adding that he recently finished constructing Lac Hong church. Priests and sisters who were trained by Father Joseph Nguyen Van Dong gather at Lac Hong church on July 21 for a special Mass. (Photo: UCA News)

Father Peter Pham Kim Huan, another priest who was trained by Father Dong, said his teacher, who loved and respected people in need, inculcated the spirit of evangelization and charity.

“Working with ethnic groups in remote areas and offering emergency aid to the poor, patients and victims of natural disasters are my main priority,” the pastor of Pho Lu Parish in Lai Chau province, home to various ethnic groups who live in poverty, told UCA News.

Father Anthony Nguyen Tan Hoi, who serves Sung Do Parish which is home to a Hmong community, said Father Dong encouraged him to study architecture at university.

“Following his example, I built Sung Do church and pay much attention to offering basic education and imparting human values and catechism to local children,” he said.

Joseph Nguyen Van Chi, who was brought up by Father Dong, said he learned construction skills from the priest and now works as a contractor with a thriving business.

“I donate money to build churches and create jobs for those who live in poverty as a way to express my deep thanks to him,” Chi said. “What we have now is all due to Father Dong’s great love, service and care for us.”

Father Den said priests who were brought up by the late priest take turns to celebrate his death anniversary.