Protest aims to express patriotism, protect the environment and give witness to justice and truth, they say 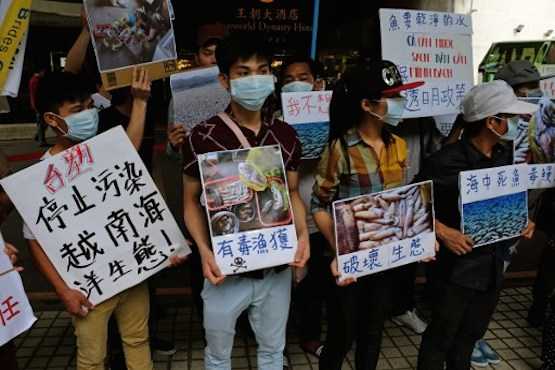 Vietnamese living in Taiwan display placards and images of dead fish, claimed by protesters to be caused by waste water dumped by Taiwan's Formosa group, during a demonstration in Taipei on June 18, 2016. (Photo by AFP)

More than 1,000 Catholics in central Vietnam have protested environment pollution by industries and alleged it's government corruption that allows it.

Catholics from Phu Yen Parish in Nghe An Province on July 17 wore shirts with pictures of fish bones and sang hymns at the church before peacefully marching around their village.

After Sunday Mass, the protesters, including children, carried flags and banners, some of which read: "Don’t sell our honor and betray our ancestors to Formosa."

In April, more than 100 tons of fish was found washed up along the coast in Central Vietnam, sparking outrage across the country.

The environmental disaster was linked to a Taiwanese-built steel plant owned by Formosa Plastics that allegedly discharged some 10,000-cubic-meters of toxic waste into the water daily.

"The protest aims to express our patriotism, protect the environment and give witness to justice and truth," a protester who asked not to be named said.

Another protester said the demonstration aimed to respond to an earlier call from 23 religious, political and civil society organizations in Vietnam for an "action month from July 6 to Aug. 6 to "agitate for the closure of Formosa, and give material and legal support to victims so that they sue the plant."

They accused local authorities of taking bribes from the plant and ignoring its toxic waste.

On July 13, Bishop Paul Nguyen Thai Hop of Vinh visited and offered rice, notebooks and pens to Con Se parishioners who have been unemployed due to the marine pollution.

He also gave money to injured people who were badly beaten by police.

On July 10, seven priests from Ky Anh deanery of Vinh Diocese, on behalf of 18,000 Catholic parishioners, petitioned government officials to "accurately and transparently estimate losses caused by Formosa and compensate victims of the incidents properly."

They also demanded the government clean up the marine environment, help people return to a normal life and prosecute Formosa according to Vietnamese laws.

Local people on July 7 took to the streets asking Formosa to be closed and for a clean sea to be returned to them.

Last week hundreds of tons of dry waste, allegedly discharged by Formosa, were discovered buried in farms and landfills in Ha Tinh province. This alleged new violation has angered the public who again has demanded the closure of the plant.