Catholics in a northern Vietnamese parish have mourned the passing of a lay missionary who spent all his life evangelizing and maintaining faith among local people in difficult times.

Hundreds of people attended Joseph Tran Minh Nhu’s funeral at Vinh Quang Church in Yen Bai province on Nov. 22. They marched in a procession to take him to the parish cemetery, three kilometers from the church.

“I would like to express my deep sense of gratitude to my godfather, who taught and led me to Catholicism in 2005,” Don, 74, said, adding that Nhu had fostered him.

“He often rode his bicycle to my house and invited me to go to church on Sundays and solemn feasts, and then we had filling meals at his home. He was a real sponsor God sent to me,” he said.

The father of six said he will follow Nhu’s inspiring example of evangelization by trying his best to bring the Catholic faith to his own family members and Thai villagers.

Nhu, who died on Nov. 20 aged 98, brought some 100 people from the Thai, Muong and Tay ethnic groups back to Catholicism and served as their godparent.

Nhu’s son Joseph Tran Xuan Thuy said his devoted father survived wars and prolonged starvation, worked hard to support his family and set a great example of faith practice to his children and others.

Thuy, who serves as head of the parish council, said his father had six children, 12 grandchildren and 14 great-grandchildren, many of them enthusiastically joining associations and serving the parish faithfully.

The 53-year-old lay leader said his late father also treated a number of patients with herbal medicine without charge and spent much time evangelizing in villages. He traveled on foot or by bicycle. 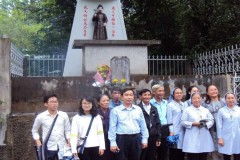 Nhu, who had grey hair and a broad accent, served as head of the parish council between 1982 and 1985, gathered local people for prayer, repaired the church and maintained the community’s faith life in hard times when religious activities were restricted.

Born in 1923 in Thai Binh province, Nhu and his brother moved to Vinh Quang Parish in the early 1930s after their parents died. They were adopted by a Catholic family.

He worked with others to overcome starvation and fight against robberies and attacks by ethnic groups in the area.

Vinh Quang Parish was established by foreign missionaries in 1909. Local people suffered prolonged starvation, political persecution and religious restriction for decades. Many Catholics including a parish priest were denounced publicly, detained and imprisoned.

The parish had no resident priests between 1964 and 2003 and local people had to depend on lay leaders’ emotional support for decades.

The parish, which is served by Father Joseph Chu Van Khuong, now has 1,800 members.