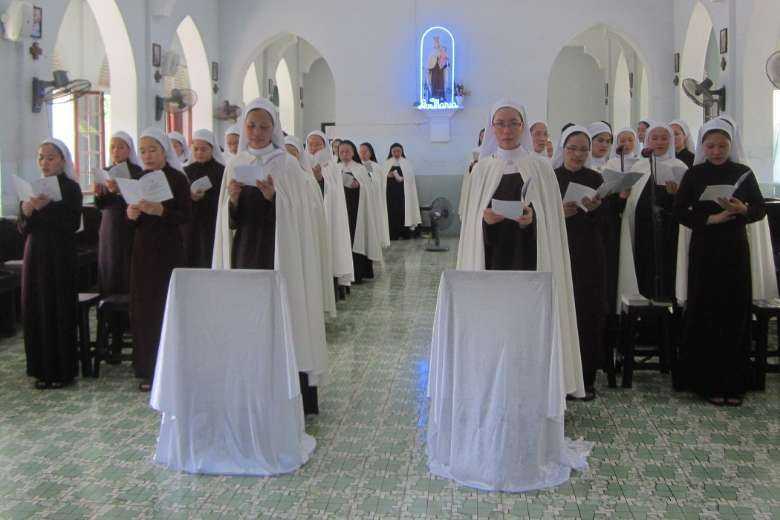 Carmelite nuns attend the celebration of the 25th anniversary of their return to their monastery in Hue on March. 19. (Photo: UCA News)

Carmelite nuns in central Vietnam have begun a jubilee year to mark their return to a monastery confiscated by the country’s communist government.

Archbishop Joseph Nguyen Chi Linh of Hue celebrated a special Mass on March 19 — the feast of St Joseph — to begin the year-long jubilee to mark the 25th anniversary of their return to their old monastery in the former Vietnamese capital of Hue.

The celebration was attended by 50 priests and 300 Catholics.

When Vietnam was reunified under communist rule in 1975, Carmelites were among many people who endured intense psychological and physical suffering.

The prelate said Carmelites in Nha Trang hung pieces of paper with their prayers written on them around the neck of a statue of St Joseph and prayed to him when they lacked food.

Early in 1975, Carmelites in Hue moved to Saigon (now Ho Chi Minh City) to escape the hard times the aftermath of the war brought, which saw soldiers taking over their monastery.

The government later gave it to the Daughters of Mary of the Immaculate Conception before it was returned to the Carmelites in1996.

During the celebration, Archbishop Linh, who is also president of the Catholic Bishops’ Conference of Vietnam, blessed a newly-built bell tower, a two-meter high statue of St Joseph and many wooden crosses.

She said they have just completed a new chapel dedicated to the saint, who they believe sent them the donors to cover the cost.

The new chapel is home to holy relics of over 30 Vietnamese martyrs and a wooden cross made from Jesus’ cross and which was given to the monastery when it was established in 1909.

Sister Mary Phan Thi Hong An, 36, who joined the monastery in 2012, said she makes cassocks and other items of clothing, while the other sisters grow vegetables, fruit and flowers, and raise poultry.

“We pray to Jesus, Mother Mary and St. Joseph and appeal to them for peace, strength and happiness so that we can overcome our challenges and pray for other people,” Sister An said.

Sister Nhan said the monastery has 55 nuns and nine novices living a life of prayer, sacrifice and quietness to pray for local priests, people in need and the local Church’s needs.

On March 19, Cardinal Peter Nguyen Van Nhon, former Archbishop of Hanoi, and two bishops concelebrated a special Mass to mark the 160th anniversary of the arrival of Carmelites in Ho Chi Minh City.

There are 10 Carmelite monasteries with nearly 300 nuns in Vietnam.