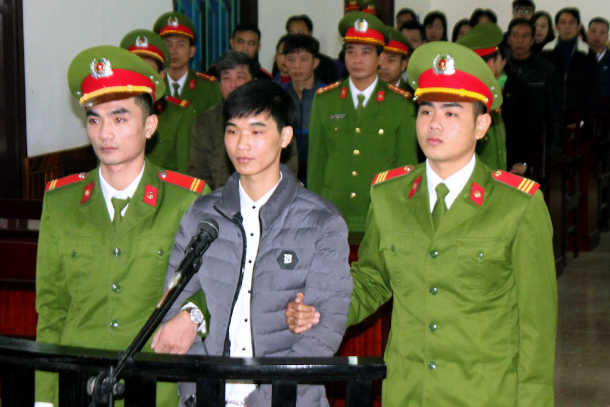 Vietnamese activist Nguyen Van Hoa (center) stands trial at a local people's court in Ha Tinh on Nov. 27, 2017. He was jailed for seven years for disseminating anti-state propaganda including articles about a Taiwanese firm responsible for a toxic leak. (Photo by AFP)

The sister of a jailed Vietnamese blogger who is on hunger strike in a protest about his mistreatment has called on the public to save him.

She said Hoa opposed prison officials who would not allow him to send complaints about being brutally tortured by police in Ha Tinh, his home province.

The 24-year-old blogger, who posted writings, photos and videos on marine pollution caused by a Taiwanese plastic group in four central provinces in 2016, accused Ha Tinh police of abducting him in January 2017 and holding him incommunicado for nine days.

He listed the names of eight officers who allegedly beat him, tied his hands together, hung him up and poured water on his face to force him to confess his crime.

Police did not announce his arrest until four months later and a court sentenced him in November 2017 to seven years in jail followed by three years’ probation for disseminating anti-state propaganda.

Hoa also accused police officers of beating him to force him to testify against Le Dinh Luong, a Catholic activist who was given a 20-year jail sentence last August for conducting activities seeking to overthrow the people's government.

Hue quoted her brother as saying that prison officers had abused power and laws to treat him badly and a guard videoed him in his cell without an official permit.

Hue called on international rights groups and all people to protect him from mistreatment. She said the blogger wanted to meet priests in prison.

On Feb. 26, her family visited Hoa, who is in extremely poor health, she said.

Vietnam convicted over 50 rights activists in 2018 and has arrested four activists for spreading anti-state material on social media this year.