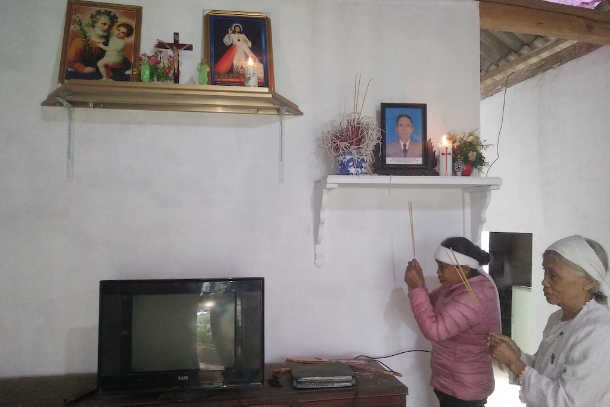 Bishops in Vietnam have launched long-awaited instructions on veneration of the dead as an effort to integrate Catholic values into the national culture and promote evangelization.

They said Vietnam and its neighboring countries are greatly affected by the traditional culture of Buddhism, Confucianism and Taoism, which give due prominence to deep respect and affection for ancestors.

“We acknowledge the long tradition of ancestor veneration in this land has been sown by the Holy Spirit,” they said in their detailed document.

They said the Church does not annul or eliminate people’s good, right and sincere values but wants to sanctify their fine customs and traditions.

The experimental document, approved by the bishops in October, said inculturation in rituals that show honor and reverence for the dead will encourage other people to believe that embracing Catholicism is not disrespectful to ancestors but still in communion with the dead via the mystery of the Communion of Saints.

Church leaders said that to meet the urgent requirements of evangelization work in Vietnam today, they have issued detailed instructions on ancestor veneration at wedding and funeral rites.

They encourage local Catholic families to have ancestor altars with candles, incense, flowers, fruits and the deceased’s pictures. They are placed under altars of God in their houses.

The bishops said parents and elderly people should share their experience and wisdom in marriage and family with new couples, and remind them of meaning and purpose of Christian marriage and filial duties.

Catholic daughters-in-law, sons-in-law and their children should partake in ancestor rituals, present offerings on ancestor altars, and offer incense in front of ancestors’ pictures as a way to have good relationships with their non-Catholic relatives.

The document, composed by Catholic experts in culture and customs over five years, allows Catholics to bow down, offer incense and show other formal expressions before dead people regardless of their faith as a sign of respecting the dead and expressing their faith in the Resurrection of Christ. They are encouraged to hold death anniversaries at homes according to local customs and without superstition.

At Buddhist funerals, Catholics are allowed to offer incense before altars of Buddha, who is seen as a most venerable, not a sign of worshiping God.

The bishops outline samples of rituals and prayers for ancestors held at weddings, funerals and death anniversaries.

They warn Catholics against customs opposed to the Catholic faith such as choosing “good days and times” for weddings, funerals, business, building, travel and giving birth.

Catholics should not erect gods of prosperity at their shops and homes, nor give offerings to them or pray to them.

They are not allowed to place hon bach (pieces of clothes covering the dead’s face and later made into models) and linh vi (wooden boards with the dead’s name, age and position) on ancestor altars. The dead’s souls are believed to be in both symbols.

They should not have mo cua ma, rites which are held at the dead’s new graves to help their souls be reincarnated.

“The road of inculturation is always full of obstacles, but the local Church never gives up because a faith which does not become culture is a faith which has not been fully received, not thoroughly thought through, not faithfully lived out,” the bishops said.

Bishop Joseph Dang Duc Ngan, head of the Episcopal Commission for Culture, said: “The instructions mark a turning point of the local Catholic Church history of ancestor veneration, which is the fourth commandment in the Ten Commandments of God.”

Bishop Ngan said the document would be applied as an experiment in the coming three years before being reviewed and officially coming into effect.