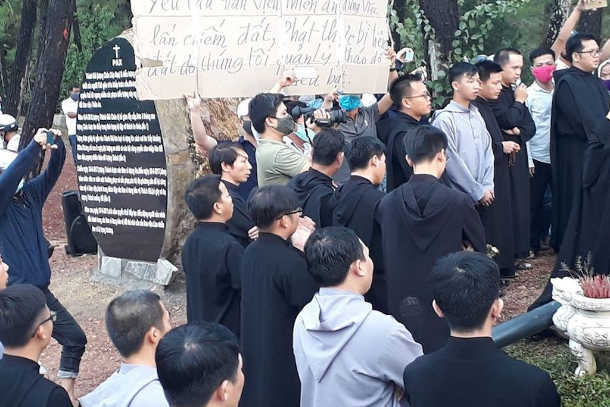 Security officers and gangsters shout and take pictures and videos while Benedictine monks pray at the disputed area on Aug. 11 (Photo supplied)

Benedictine monks in central Vietnam have publicly called on government-led land grabbers to end their "acts of terrorism" against them and respect human rights.

The monks accused the Thua Thien Hue provincial government of organizing and sponsoring a group of 40 land grabbers to penetrate their monastery on Aug. 11-12 while local people were taking social distancing measures to stem the Covid-19 pandemic.

They said land grabbers with placards and leaflets “threatened and terrorized us and vilified our monastic life.”

They said they had identified those who led the attackers as officials from the People’s Committee of Thuy Bang Commune and security officers who had broken into the monastery on Aug. 10.

The Benedictines said the assailants used loudspeakers to slander the Catholic Church as they did in June 2017 when they smashed the crucified statue on a cross and brutally beat many monks.

The monks said the provincial government’s constant violent acts “go against civilized behavior and treat Catholics like hostile forces in order to remove them out of social activities in the province.”

“In God’s love, we wish those individuals and agencies to behave well and respect basic human rights and dignity by law,” Father Andrew Thong Nguyen Van Tam, superior of Thien An Monastery, said in a press release on Aug. 14.

Father Tam asked them to immediately end gathering security officers and gangsters to terrorize the monastery and disrespecting the monks’ dignity and honor.

He also urged foreign diplomats, rights groups and people of other faiths to take necessary measures to protect the monks’ reason, interests and truth.

A local Catholic told UCA News that local government authorities set up a station near the monastery’s gate and checked all people who want to visit the monks. They also erected a 100-meter-long barbed wire fence preventing the monks from approaching a lake in the disputed area.

Disputes between the monks and the government have lasted for decades since the government forcibly appropriated their properties and facilities after 1975. A state-run company sold many plots to local people and officials who built houses and restaurants.

The monks started to cultivate their 106-hectare land and pine forests in 1940.

The monks have filed petitions many times to demand local government authorities return their properties, but they got no response from the government.

Property disputes between the people and government authorities are rampant in the Southeast Asian country as the communist government refuses to recognize private ownership of property.