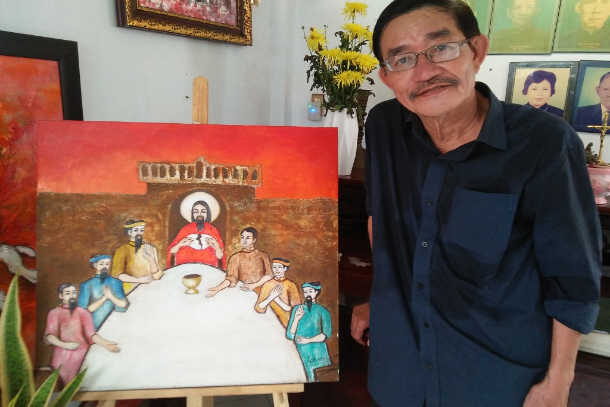 With skillful and expert hands, Benedictine Brother Joseph Tran Tri sculpts the minutest details of a Vietnamese-style statue of Christ the King with traditional tools.

Brother Tri crafted the life-size statue, cast in plaster and cement in a clay mold, clad in Vietnamese imperial clothes, carrying a book in his left hand and a bamboo cane in his right. Bamboo is a symbol of the Vietnamese.

“I try to create statues of Christ with faces showing magnanimity, youthfulness, compassion and amiability as our ancient sages,” said the monk, who was taught how to cast statues by his father in Ho Chi Minh City.

He also creates statues of Mother Mary and Saint Joseph in Vietnamese settings — features, costumes and symbols. Joseph in traditional black ao dai, white trousers and turban has a square face that shows the manly virtues of strength, courage and benevolence as the head of a family. Mary with an oval face expressing tenderness, charity and maternal love and yellow turban wears a traditional blue and white dress, white blouse and black trousers.

The prolific caster, who started out on his career in 2000, has made some 6,000 religious statues of varying heights from 20 centimeters to 1.6 meters.

Brother Tri, who joined the Benedictine monastery of Thien An in Thua Thien Hue province in 2002, said his religious artworks are produced to order from parishes and Catholic shops in central provinces.

“I try to meet the needs of Vietnamese Catholics in the country and abroad who love religious statues in native styles. Contemplating these statues, they can revive fond memories of their past life and find themselves at present,” said the 49-year-old monk.

“Through my artworks, people feel that Jesus, Mary and Joseph are Vietnamese in Vietnam and protect their nation. They can find the emotional and physical closeness to Jesus and saints and easily talk with them about their joys and sadness. As a result, Catholicism is no longer seen as a foreign faith.

“I use traditional arts to enrich sacred sculpture as inculturation and evangelization.” Benedictine monk Joseph Tran Tri works on a statue of Christ the King at the Benedictine monastery of Thien An in Thua Thien Hue province. (Photo: UCA News)

Artist Peter Le Hieu, who has created over 700 paintings, most of them religious, said biblical characters depicted in Vietnamese style are easily accepted by converts and followers of other faiths.

“Catechumens and non-Christians treat characters of the Bible in Vietnamese settings as closely as their ancestors and masters and willingly accept Catholicism,” Hieu said. The prolific painter and his wife converted in 1980 after they prayed to St. Anthony of Padua to heal their ailing daughter.

Hieu, who serves as head of Domini Art, a group of artists founded by local Dominicans in 2008 to promote the faith through works of art, said Vietnamese people traditionally draw pictures of those they love as a way to respect and remember them.

The 62-year-old father of two said integrating Christian values into native culture is an effective method of evangelization.

Hieu, a member of the local Dominican laity, had just finished a lacquer painting of Jesus Establishing the Holy Communion. Jesus and the apostles are depicted with Vietnamese faces and long hair, clad in traditional colorful attire.

The St. Anthony devotee said he and other artists try to do many paintings with religious themes for their annual art exhibition at the end of this year. They use the proceeds from selling their works to support people in need to celebrate the lunar new year.

Maria Goretti Phan Thi Anh Tuyet from Lang Co parish in Thua Thien Hue province said she has a one-meter statue of Jesus in a green ao dai, white trousers, black boat-like shoes and a pink turban on her balcony. The statue with smiling face holds a stem of cycad in his hands.

Tuyet, 69, said she commissioned Brother Tri to make the Vietnamese-style statue after she prayed in front of another Jesus statue at Hoi An parish in Quang Nam province in 2018 and felt close to him.

“We display the nativity statues at home at Christmas to introduce Catholicism to our neighbors,” said Ty, who lives among Buddhists and atheists.

He said the statues marked the 25th anniversary of their wedding. They married on Christmas Day in 1994 and their son was born on the following Noel.

Angels looking like Eastern fairies with wings play traditional instruments and sing, Jesus and Joseph have two halos and Mary has one, according to the concept of yin-yang. They are in traditional attire and surrounded by a buffalo and three men.

Father Triet said Brother Tri, well known his mastery of lacquer painting, was commissioned to make the lacquer picture which was gifted to local Dominicans. The priceless painting is kept at the Dominican-run Mai Khoi Church in the city.

He said many artists from other faiths paint Catholic paintings in Vietnamese style.