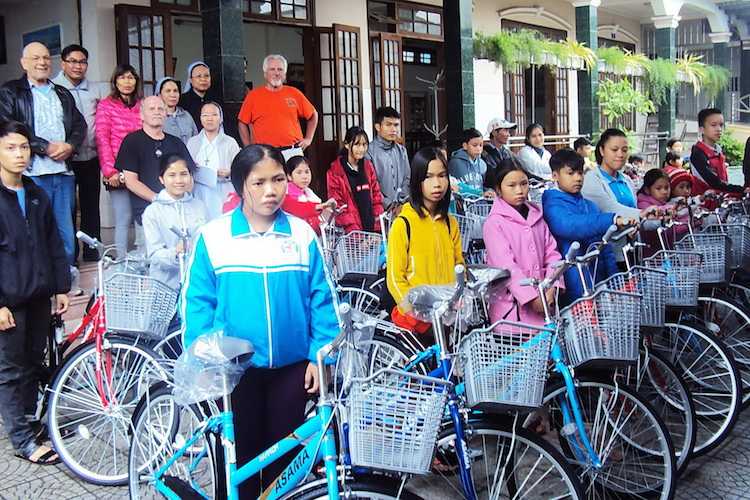 Michael Shuman in orange (top right) poses for a photo with students who received free bikes at the Kim Long Charity Clinic in Hue City, central Vietnam on April 8. (Photo by Peter Nguyen/ucanews.com)

American veterans who fought in the Vietnam War are offering hundreds of bicycles to poor students as way to ease people's suffering in parts of the country still dealing with the effects of the conflict.

"We want to supply these bicycles for Vietnamese students from poor families in remote areas so that they can pursue their studies," said Michael Shuman, a former U.S. Marine.

Shuman, 69, was visiting Khe Sanh, an old American base in Quang Tri Province, in 2014 when he realized that many children aged 6-14 were being made to work to support their families — either instead of or in addition to their studies.

Some of the more fortunate ones had bicycles to help them get around but many of the bikes were in a dilapidated state, with flat tires bound by a kind of plant bark, he said.

Shuman and two other war veterans, who are also Catholics, offered 32 bicycles to students at the church-run Kim Long Charity Clinic in Hue City on April 8.

They also gave bicycles to 110 students from A Luoi District of Thua Thien Hue Province at the headquarters of the People's Committee of the district on April 15.

"We will try to spend the rest of our lives doing something helpful for poor children in Vietnam as a way to alleviate the physical and emotional suffering partly caused by the terrible war," he said.

Shuman, who was based in Khe Sanh from 1967-1968, said many innocent people died due to American air strikes targeting guerrillas in villages in the two provinces of Thua Thien Hue and Quang Tri.

In May 2017, Bishop Peter Kang U-il of South Korea called for more investigations into allegations of atrocities committed during the war.

Do Thi Thanh Luong, one of the eighth-grade beneficiaries, said: "Now I have a bike to get to school on. I'm very grateful to the Americans for this gift."

The 15-year-old girl added that in the past she had to hitch a lift on her friend's bicycle or walk the three kilometers to school each day. She said this often made her late for class.

Luong, who has two siblings, said her grandfather was a former South Vietnamese paratrooper who died in 1973. Her father, 40, went blind while he was collecting unexploded ordnance for a living in 2006.

Another beneficiary, Huynh Thi Huong Ngat, a sixth grader, said her family could not afford to buy her a bike.

Ngat, 12, said her grandfather was a soldier who fought for the communists and was wounded during the war, while her father left their family to fend for themselves and her mother has been blind since 2008 due to cataracts.

Her 19-year-old sister had to drop out of school in the tenth grade and now works at a local store to support the family, she added.

During their visits to the central provinces from April 8-25 the veterans also planned to visit and give bicycles to students in Quang Tri and Quang Nam on April 19 and April 23, respectively.

Mark O'Connor, one of the three veterans, said they started to raise funds for the project from other Vietnam War veterans in the United States in 2014. They offered the first batch of 60 bikes to children from Khe Sanh in 2015.

He said that since then they have paid annual visits to the area and given nearly 500 bikes to local children. Each one costs US$65.

They asked local Redemptorists to provide them with a list of kids considered most in need of a bicycle.