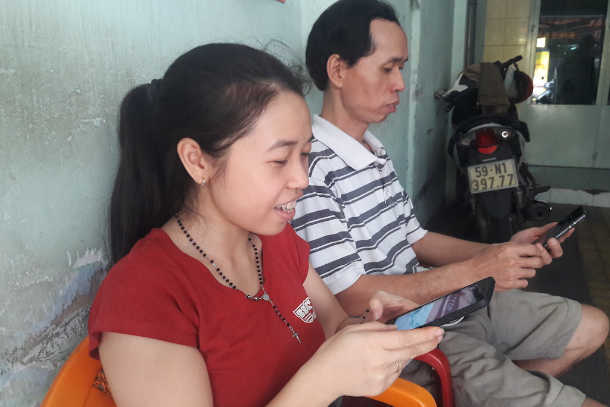 Catholics surf social media on smartphones in June in Ho Chi Minh City. Fears are growing that a new cybersecurity law will stifle freedom of speech in Vietnam. (Photo by Mary Tran/ucanews.com)

They say the law set to take effect on Jan. 1, 2019, includes "many clauses which flagrantly violate citizens' freedom of speech" and specifies vaguely banned behavior such as "undermining customs," "distorting history" and "offending great people."

Groups and activists warn that those bans could give authorities the power to violate citizens' freedom of speech, which is guaranteed by the constitution.

The law also requires Facebook, Google and other global technology firms to store personal data on users in Vietnam and open offices in the country.

Internet service providers are asked to prevent and delete published information at authorities' request without the courts' approval.

Activists fear citizens will have no legal procedures to protect their data and private information. They say the cybersecurity law passed on June 12 by National Assembly members goes against international standards of human rights.

The law "will create trade barriers for international enterprises who operate in Vietnam, forcing those enterprises to establish domestic branches or representative offices and restore users' information in the country," activists said.

About 1,500 individuals including civil society groups have signed a petition calling for revision of the cybersecurity law.

On Sept. 13, Vietnam's acting Information and Communication Minister Nguyen Manh Hung said that "Facebook, given its successful business in Vietnam, should reserve revenue to invest in research and development and soon open an office in Vietnam."

Prime Minister Nguyen Xuan Phuc told Simon Milner, Facebook's vice-president of public policy for Asia Pacific, that the social media giant should closely cooperate with his government, remove bad information and be responsible for the protection of its 60 million user accounts in Vietnam.

Members of the European Parliament are demanding more human rights progress in Vietnam ahead of the possible ratification of the EVFTA. They are calling on Vietnam to revise the cybersecurity law and bring it into compliance with international human rights standards, including the International Covenant on Civil and Political Rights to which Vietnam has been a state party since 1982.