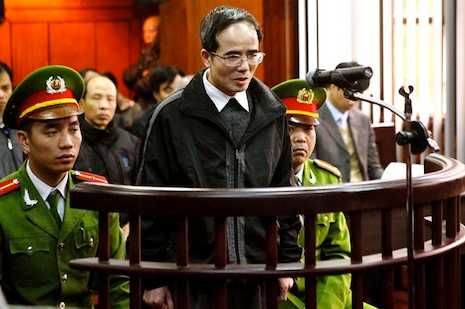 By AFP and ucanews.com, Hanoi

One of Vietnam's most prominent dissidents lost his appeal Tuesday against imprisonment for tax evasion, as dozens of supporters protested outside the court against the communist state's crackdown on dissent.

Scores of police encircled the Hanoi People's Court of Appeals, which upheld a two and a half year jail sentence for Catholic lawyer and blogger Le Quoc Quan, whose conviction in October was denounced by rights campaigners as politically motivated.

"The defendant did not show regret and took a disrespectful attitude towards the court," said court president Nguyen Van Son, confirming the jail term and a fine of around US$57,000.

The television feed to the court's observation room was cut off immediately after the verdict.

The lawyer earlier told the court he was "completely innocent", of the charges against him.

"I am the victim of a political conspiracy. I object to this trial," he said.

Quan – who is on the 17th day of a hunger strike, according to his brother – looked tired and thin as he stood in the dock and appeared to swoon at one point, prompting security guards to prop him up.

The hunger strike began after Quan asked for and was refused a Bible and access to a priest for confession, but would continue if his appeal was not overturned, according to a radio report by Vietnam Redemptorist News.

His lawyer Bui Quang Nghiem told the court that the tax evasion charges were a joke.

"If you want to try Le Quoc Quan for his activism, you don't need to bring him to court for tax evasion," he said.

The 43-year-old lawyer, who blogged on a range of sensitive topics including civil rights, political pluralism and religious freedom, has been in detention since December 2012.

Quan's younger brother, Le Quoc Quyet, said outside the court that the family had not been given permission to attend the hearing.

Shouting "Free Le Quoc Quan" and waving signs calling for the Catholic lawyer's release, around 150 people gathered outside the court as his appeal hearing got under way, causing rush-hour traffic chaos.

The scale of the protest was unusual in Vietnam, where authorities keep a tight lid on dissent.

Hundreds of confused commuters were caught up in the early morning protest.

Vietnam – a one-party state – is regularly denounced by rights groups and Western governments for its intolerance of political dissent and systematic violations of freedom of religion.

Reporters Without Borders said earlier this month that Vietnam was second only to China in the number of bloggers it detained, with at least 34 currently behind bars.

The US embassy in Hanoi said in October that Le Quoc Quan's conviction was part of a "disturbing" trend of Vietnam using tax laws to imprison people for peacefully expressing their political views.

In a post on Facebook, the legal advocacy group Prisoners of Conscience Association said “The UN Working Group on Arbitrary Detention has examined the case, and has asked the government of Vietnam to release him immediately.”