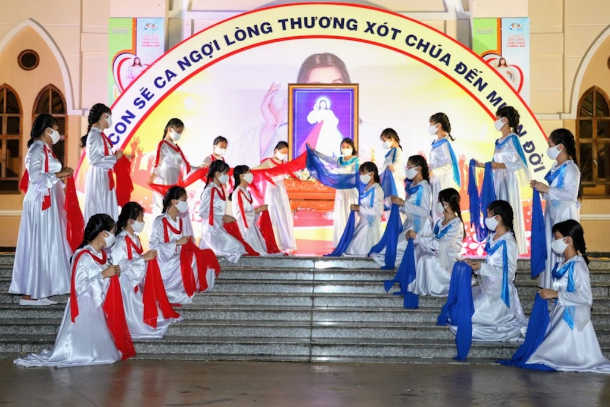 Vietnamese children wearing face masks perform a dance in front of a picture of Divine Mercy at Long Thanh Church in Dong Nai province on March 21. (Photo courtesy of giaophanxuanloc.net)

Vietnam’s prime minister has ordered the cancellation of all religious services and public gatherings of over 20 people in order to curtail the spread of Covid-19.

“We have two weeks to take firm action. The Covid-19 outbreak will outstrip our actions if we do not implement prompt and drastic measures,” Prime Minister Nguyen Xuan Phuc said at a meeting in Hanoi on March 26.

On March 27, the prime minister ordered authorities in provinces and cities to temporarily suspend all meetings and gatherings of more than 20 people until April 15.

He said all religious services and gatherings involving over 20 people are strictly suspended. He also reprimanded the People’s Committee of Tay Ho district in Hanoi for letting people flock to a local temple on March 24.

The head of the government said authorities will be severely punished if gatherings of more than 20 people take place in their localities. He also banned gatherings of over 10 people outside public facilities, hospitals and schools.

The government has ordered the shutdown of such services as massage parlors, tourist sites, cinemas and restaurants. Major cities including Hanoi, Ho Chi Minh City, Hai Phong, Can Tho and Da Nang need to temporarily close all service facilities except those that offer food, drugs and medical treatment.

Phuc called on the public to limit their travel and work from home to avoid exposing themselves to infection.

The archdioceses of Hanoi and Ho Chi Minh City and the dioceses of Ba Ria, Ban Me Thuot, Can Tho, Da Nang, Hai Phong, Kontum, Long Xuyen, My Tho, Phan Thiet, Thanh Hoa and Xuan Loc have called off daily Masses and other liturgical services from March 28 until further notice.

Catholics have been urged to pray privately at home and in small numbers at churches, do charitable work and attend Masses and Holy Week services livestreamed via the internet.

Bishop Peter Nguyen Van Kham of My Tho urged Catholics to accept restrictions as their sacrifice to God this Lent. “They should express their solidarity with Pope Francis, who celebrates Mass through social media, and other people in Vietnam who try to stem the deadly Covid-19 pandemic and protect the public’s health,” he said.

Bishop Joseph Dinh Duc Dao of Xuan Loc called on local Catholics to offer material support to those who lack food and cooperate with other people to stem the spread of the coronavirus. “We try to make the pandemic a chance of blessing and love,” Bishop Dao said.

Vietnam's health ministry has reported 153 confirmed Covid-19 cases including 20 recovered cases, while nearly 59,000 suspected cases are quarantined or being monitored at hospitals and homes. The first case in Vietnam was found on Jan. 23.