Nearly 100 prisoners of conscience are behind bars for peaceful exercise of human rights, Amnesty International reports 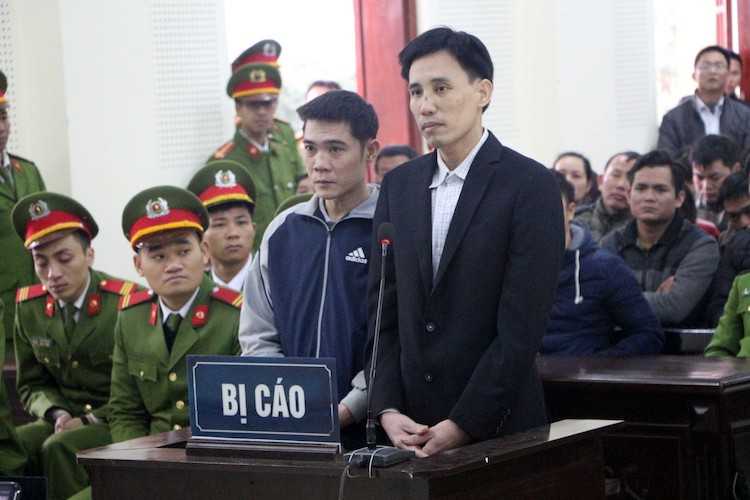 Activist Hoang Duc Binh (centre left) attends court with co-accused Nguyen Nam Phong in Nghe An on Feb. 6. Binh was jailed for 14 years over protests against a toxic waste dump that killed tonnes of fish. Phong was jailed for two years. (Photo by Vietnam News Agency/AFP)

An international rights group has condemned the Vietnamese government for targeting rights defenders and religious activists over basic human rights.

"In 2017, Vietnamese authorities intensified crackdowns on the peaceful exercise of the human rights to freedom of expression, assembly and association as well as thought, conscience and religion," Amnesty International said.

It said authorities primarily targeted human rights defenders, religious followers and peaceful environmental, social and political activists, including individuals expressing themselves online. They were prosecuted either for organizing protests criticizing the government or for disseminating information alternative to that promoted by the state.

In its report "Prisoners of Conscience in Vietnam" issued April 4, the group listed 97 known prisoners of conscience, of whom 88 are male and nine are female.

Some 57 are religious followers, including 30 Christians from ethnic minority groups. The rest are political, social and environmental activists. They are aged 24-90.

Among them, 16 people have been held in pre-trial detention, 42 people were sentenced to 10 years or more in jail, and the rest are serving prison sentences of less than 10 years.

"Many people have been arbitrarily detained, prosecuted in unfair trials on national security and other vaguely worded charges, and handed lengthy prison sentences," it said.

It said people were routinely held incommunicado and in solitary confinement. Many were transferred to prisons distant from their family homes as a punitive measure and were tortured and otherwise ill-treated in prison.

Prisoners of conscience were denied access to a lawyer and their family members did not know of their whereabouts, heightening the risk of torture and other ill-treatment.