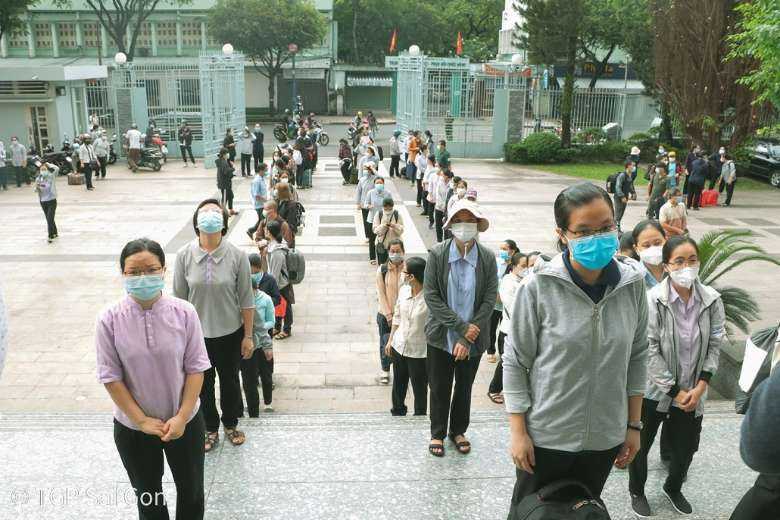 Catholic nuns queue to check in at the city hall in Ho Chi Minh City on July 22. (Photo: tgpsaigon.net)

Hundreds of volunteers from religious organizations in a southern Vietnamese city have bravely devoted themselves to caring for Covid-19 patients at hospitals that have a shortage of medical workers.

As it poured with rain on the morning of July 22, some 300 volunteers from local faiths came to meet government officials and religious leaders at City Hall in Ho Chi Minh City before they were driven to field hospitals for Covid-19 patients.

A group of Dominican sisters wearing face masks and bags on their backs sang a hymn loudly and cheerfully in front of the hall.

Some smilingly said they did not fear “the dangerous pandemic but we are in the best of spirits as we are accompanied by God.”

"We try to serve patients as ways to offer God's love to others. We wish to fulfill our duties as frontline healthcare givers and want all people to pray for us to be peaceful in the coming days," St. Paul de Chartres Sister Mary Nguyen Thi Hue said.

A Buddhist monk from Vinh Hanh Pagoda said he hoped religious volunteers would work in concord with one another to look after patients and fight the contagious outbreak.

He said 80 Buddhist volunteers had joined the government-run campaign to call on religious groups to serve coronavirus patients at hospitals.

To Thi Bich Chau, head of the city's Fatherland Front Committee, said the southern commercial hub was reporting thousands of infections per day and the pandemic was threatening people's health and severely affecting their life, leaving many jobless.

Local hospitals for Covid-19 patients have been overloaded and lack health workers. The city of nine million has become Vietnam’s epicenter of the latest outbreak that broke out in late April. The city had recorded 48,863 infections as of July 23.

Chau said she was deeply moved by the fact that religious groups from other places were making generous donations to local residents who suffer lack of food due to social distancing measures.

She asked all religious followers to take part in giving healthcare at local hospitals and quarantine facilities according to their capabilities and condition.

"Today 299 religious volunteers — 240 women and 59 men — in the first stage set off for hospitals. You really deserve trust and respect from the public," she said.

The city official called on volunteers to sympathize with the government as conditions at hospitals and quarantine facilities are not as good as their homes.

"Your voluntary services will make a great contribution to curbing the pandemic in the city," she noted.

"We are proud to participate in the massive campaign. We are determined to serve patients with our hearts and hands," said Venerable Thich Truc Khai, representative for the Buddhist volunteers.

Father Joseph Dao Nguyen Vu, head of the Office of the Catholic Bishops' Conference of Vietnam, said Ho Chi Minh City Archdiocese had 206 religious volunteers at this time. Many could not set off as they suffered fever and other symptoms after being vaccinated.

Others will join the campaign at other times. The archdiocese has 430 religious registered to serve at hospitals.

On July 22, Nguyen Van Nen, party chief in the city, said the city would impose stricter social distancing measures until Aug. 1 to deal with the fourth wave of the outbreak.

He said families are banned from contacting their neighbors and can only go out for food two times a week. People in high-risk places must stay indoors and receive basic commodities from the authorities. All production and construction sectors are halted.