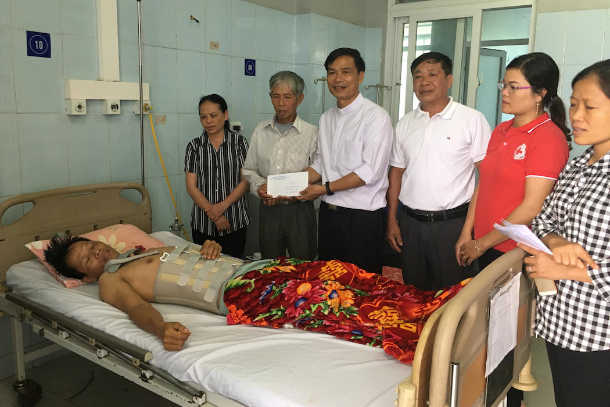 Father Peter Phan Kim Huan (third from left) and church workers offer money to a flood victim at a hospital in Vietnam on June 30. (Photo by Joseph Nguyen)

Church workers in Vietnam are joining hands with local authorities to provide humanitarian relief to victims of historic floods in the north of the country.

Floods and landslides caused by torrential rain in the four mountainous provinces of Dien Bien, Ha Giang, Lai Chau and Lao Cai from June 23-26 claimed 19 lives, while 11 people were missing.

Some 2,200 houses were destroyed or inundated while hundreds of hectares of crops were damaged, thousands of cattle killed and numerous roads and public facilities ruined, the Vietnam Disaster Management Authority said.

"We visited families of the dead or injured and offered them financial aid of up to 3 million dong (US$130) for every life lost, and 2 million dong for everyone who was injured," said Father Peter Phan Kim Huan, pastor of Lai Chau parish, which felt the brunt of last month's floods.

Father Huan said he gave 2 million dong to one family whose house was ruined, adding Caritas Vietnam had already donated 170 million dong in the form of emergency relief.

Father Huan, 51, said he joined nuns, lay leaders, local authorities and Red Cross workers in visiting some of the victims in the two districts of Tan Uyen and Sin Ho from July 3-4.

In the past, the government banned priests from making such visits or giving aid to local ethnic Hmong, Man and Thai groups.

But Father Huan said they softened their stance after he showed them how much Caritas could contribute.

"It's important both sides cooperate in looking after the victims," he said. "We have been fortunate to be able to meet ethnic people in this remote area regardless of their background."

Church workers reported traveling by car, motorbike and on foot, often hiking along mud roads for hours just to reach some of the flood victims.

The priest said many farmers in the region have had their crops and possessions washed away by the floods, the worst recorded in the part of the world in the last 70 years.

In some places, landslides buried houses, crops and roads in carnage that stretched for kilometers.

"Some of those houses are still buried under land and rock," Father Huan said. "People have been very good in hosting those who have lost their homes as the rains continue. We prayed and offered incense for the dead and tried to console bereaved relatives."

In line with local custom, some villagers made straw models of their missing relatives and put them in coffins for burial.

The priest said many people have also been given cooking equipment, clothes, food and money to pay for their medical treatment and funeral services. The benefactors came from a range of sources, he said.

"They were in dire need of temporary shelter," he said, adding he plans to visit more victims in other districts this week.