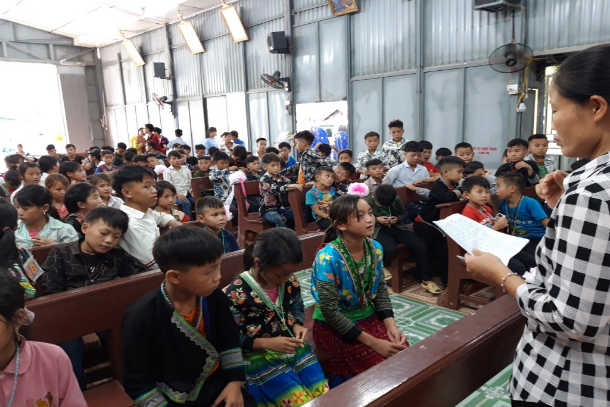 Catholic communities in a northwestern Vietnamese province which refused to accept religions have had their legal status approved by the government after a decades-long wait.

On Aug. 21, Lai Chau provincial authorities announced that they had officially allowed Hung Hoa Diocese to establish Lai Chau Parish based in San Thang commune in Lai Chau city. The parish’s chapel is now based at the house of Nguyen Van Le, a layman.

Authorities permitted Father Joseph Nguyen Van Ninh, 49, to offer pastoral care to 2,791 Catholics from communities who are allowed to gather for prayer.

They also asked the diocese and new parish to hold religious activities according to laws in the province where no religion was accepted.

Father Peter Pham Thanh Binh, head of Lao Cai Lai Chau deanery, said the move is good news for local Catholics who have waited it for a very long time.

Father Binh, who offered pastoral care to the faithful from 2006-16, said Catholics started to move to the province in 1966 and constantly petitioned local authorities to allow their religious activities. The diocese had submitted petitions five times since 2007.

He said the province is home to some 20 Catholic communities including Hmong villagers. They have to borrow people’s houses for their activities and some of them are allowed to register religious work each year.

Visiting priests are required to seek government permits before their arrival. They have to submit lists of visitors and meet the authorities before working with local Catholics. Authorities closely watch visitors and local people until they leave.

“Visiting priests try to teach the catechism and hymns, celebrate Masses, hear confessions, give baptisms, deal with problems relating marriages and the community within 2-3 hours and travel to other communities who are waiting for them,” said Father Binh, adding that they have to visit many communities on weekends.

The 49-year-old priest called on the faithful to bravely declare their Catholic identities, live out their faith through daily activities and hold religious activities by themselves during the pandemic crisis.

The pastor of Sa Pa Parish, who paid pastoral visits to four communities in Than Uyen district on the Pentecost, May 31, said he is concerned about faith practices among local Catholics who had to cancel monthly Masses and gatherings on Sundays due to the contagion.

He hopes the new parish will satisfy the increasing religious needs of local Catholic communities.

“We are happy that from now on we can publicly organize our activities which were considered illegal in the past,” said Mary Nguyen Phuong Quy, a local Catholic.

The mother of two said their ancestors waited for the recognition of the parish for half a century and many of them had died before the event.

“We deeply thank God for his love for us and bishops and priests who have persistently had constructive dialogue with the government for what we have today,” she said.

Quy, who is active in church work, said half the local Catholics are Hmong villagers who have suffered severe religious restrictions for decades.

She hoped nuns and priests will offer pastoral care to the faithful, especially Hmong, without problems from the government, adding that Catholics plan to celebrate the parish’s establishment in the coming weeks.

Mary Nguyen Thi Phuong bemoaned that her old relatives could not see the day when the parish was approved. “We are deeply grateful to our ancestors who built the communities and transmitted the faith to younger generations,” she said.

She said Lai Chau is the first parish approved by the government. The parish has the legal right to buy land and build facilities.

Father Ninh was assigned to the parish in July and succeeded Father Peter Phan Kim Huan.

The neighboring province of Son La is home to 5,000 Catholics forming four parishes but none of them is recognized by the authorities. They hold religious activities at people’s homes and face problems from authorities.