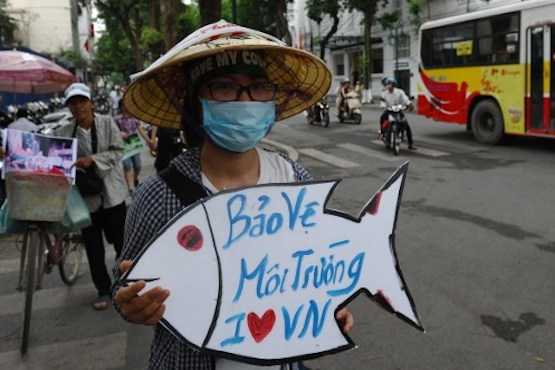 Vietnamese protesters demonstrate against Taiwanese conglomerate Formosa during a rally in Hanoi in this May 1, 2016 file photo. (Photo by Hoang Dinh Nam/AFP)

A Catholic priest in Vietnam on March 20 dismissed official claims that activists instigated clashes with local authorities during a February protest over the government's handling of a toxic waste spill off the country's central coast.

Father Dang Huu Nam of the Phu Yen parish, under central Vietnam's Roman Catholic Vinh Diocese, told Radio Free Asia (RFA) he wrote a letter rejecting accusations by officials in Nghe An province that activists protesting Hanoi's settlement with the Formosa steel plant over its toxic waste spill had touched off the clash. "I just sent a reply today, following letter number 1022 of the Nghe An People's Committee about the march on Feb. 14," Father Nam told RFA's Vietnamese Service."We reiterate that there was nothing wrong in what priest Thuc and his parishioners did. What they did was civil and should be encouraged. The government should have helped the people to exercise their rights."On Feb. 14, Father Nguyen Dinh Thuc led around 500 mostly Song Ngoc parishioners to deliver a petition to authorities in Ha Tinh province's Ky Anh district demanding adequate compensation for the losses caused by the spill in April last year, which poisoned much of the central coast.Police set upon the group, beating and arresting several demonstrators, sources said.

On March 20, Father Nam said thousands of parishioners gathered on March 19 for a church service in Song Ngoc and then marched to the local government office to protest against Formosa.

"There were 7,000 people at its peak," Father Nam said."After the service, we marched to the Quynh Ngoc village office to express our concerns," he said, adding that authorities observed the march, but did not intervene.