One man was beaten unconscious and 20 others were injured, says eyewitness 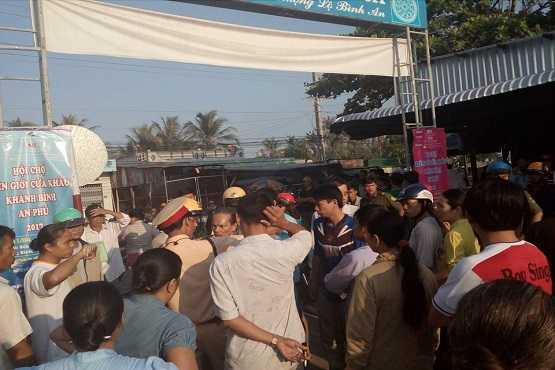 Police attacked  Hoa Hao Buddhists as they tried to attend a service held at the home of Bui Van Trung, a former prisoner of conscience, in An Giang Province on April 19. (Photo supplied)

Authorities and police violently accosted followers of a Buddhist sect in southern Vietnam as they tried to attend a ceremony held by a former prisoner of conscience.

Bui Van Trung, a Hoa Hao Buddhist, who was released from prison in October after being sentenced to four years for his religious activities, held the 29th anniversary of his mother's death at his home on April 19.

Minh Ky, an eyewitness, said some 100 police and authorities in An Phu District of An Giang province, blocked the path leading to Trung's house. They threatened and stopped Hoa Hao Buddhist followers on their way to the ceremony.

"They took away their personal papers, kept their motorcycles and broke their cellphones," Ky said.

People who resisted the mistreatment and tried to prevent police from taking their motorbikes were assaulted. "One man was beaten unconscious and 20 others were injured," Ky said.

Trung and his relatives raised banners and shouted, "Down with communists" and "Religious persecution."

Trung's son, Bui Van Tham, who was given a bloody mouth, said 50 people still managed to attend the service despite the harassment.

Tham accused local government authorities of persecuting followers and trying to force them to join the state-approved Hoa Hao Buddhism Organization which they see as contrary to religion's traditions.

Trung has been using his home to preach Hoa Hao Buddhist doctrine having rejected the Hoa Hao Buddhism Organization. However, only small numbers have been coming due to the threat of government persecution, Tham said.

The Hoa Hao Buddhists, follow an indigenous Buddhist sect founded in 1939 by Huynh Phu So, are banned from conducting faith education courses, prayer meetings or building facilities. Their followers can only practice their faith at home.