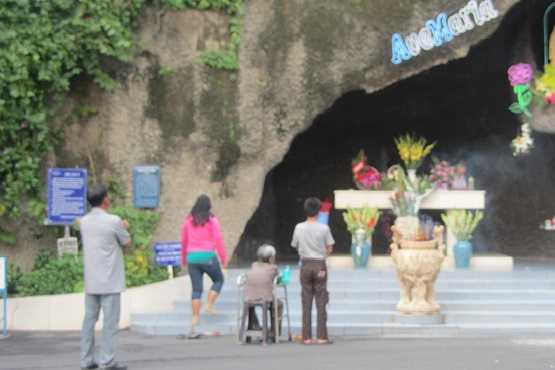 Vietnamese Catholics pray at a Marian grotto in Ho Chi Minh City. Catholics and other faith groups in the country are wary over new state regulations — which take effect on Jan. 1, 2018 — that will control religious activities. (ucanews.com photo)

The Vietnam National Assembly has ratified a controversial law on religious activities sparking a strong reaction from religious communities in the communist state.

The Law on Belief and Religion, which was passed by the National Assembly on Nov. 18, is the first ever law on religious activities since the country was reunified in 1975.

The law, which will take effect on Jan. 1, 2018, regulates legal procedures and conditions regarding people's beliefs. Faith groups will be required to register with authorities and inform them of their activities with authorities having the right to approve or refuse.

The law allows for detainees and prisoners to "use scriptures and show their faith." Religious organizations may also engage in education, vocational training, health care, charitable works and publishing.

Religious activities banned include those that infringe on national defense, harm social ethics and disunite the nation.

The reaction from faith figures has not been very enthusiastic.

A senior religious researcher in Hanoi, who did not want to be named, said the law "focuses on state control over religions rather than meeting the religious needs of people," adding that religions must be fairly treated like other social and political organizations.

The law has some vague articles which makes some worried they could be exploited. For example, religious groups are required to register with authorities and hold their activities at "legal places." Another point of confusion is what is meant by allowing religions to engage in educational activities when education legislation bans religious input, he said.

A Catholic priest in Ho Chi Minh City said the law "aims to help the government administer religious activities." Religious followers are not different from other citizens and should have the same rights as guaranteed by the constitution.

"A specific law on religion is not necessary and shows clear discrimination as if religion is an enemy that needs to be controlled," he said on conditions of anonymity.

The Communist Party wants to control religion because they are afraid that religious leaders have more prestige and more influence than government officials, he added.

When the National Assembly convened its month-long session to approve the law on Oct. 20, the Interfaith Council of Vietnam issued a statement against it.

"As spiritual leaders struggling for religions' independence and the people's human and civil rights, we completely reject the draft law that the communist government is using the National Assembly to approve and impose," said 27 council members drawn from Christian, Buddhist, Cao Dai and Hoa Hao communities.

Many representatives on the council have themselves suffered persecution during their struggle for religious freedom.

Father Nguyen Van Ly, a leading advocate for democracy and freedom of belief, was only released in May after serving eight years in prison.

The council said that religious groups and their followers had no obligation to obey the new law.

"Accepting the bill means continuing to support the dictatorial regime," their statement said.