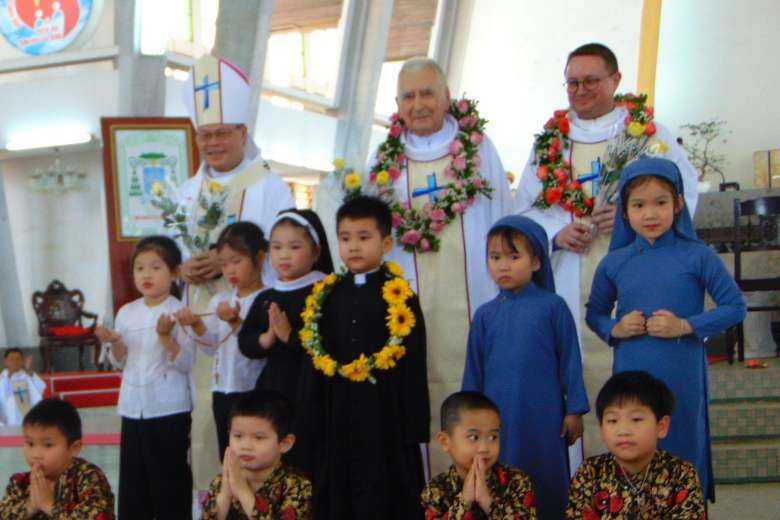 Nuns in central Vietnam find sheer inspiration to serve people in need from the late Father Jean-Baptiste Etcharren, who spent all his life offering loving care to local people.

“I learned some valuable lessons about deep compassion for people around me from the beloved Father Etcharren, who devoted himself to serving people in Vietnam,” Sister Anna Truong Thi Tuyet said.

The French missionary, who started his mission in Vietnam in 1959, died of old age on Sept. 21 in Hue. The Paris Foreign Missions Society (MEP) member was 89.

Sister Tuyet said her family lived in Dong Ha Parish in Quang Tri province when she was a child. The parish was served by Father Etcharren between 1966 and 1972.

She and her two siblings had to drop out of school as their mother could not afford to send them. Their father, a former South Vietnam soldier, went missing in action in Gio Linh district.

“One day Father Etcharren visited us and promised to help us pursue our studies, although we were not Catholic then,” Sister Tuyet said, adding that they were provided with food and money to buy uniforms and books for their studies.

We were excited by the priest and local Catholics’ services and decided to convert to Catholicism. We were baptized by Father Etcharren in 1967

They were admitted to a Catholic school run by Lovers of the Holy Cross of Hue Sisters. The priest regularly visited and offered sweets to students.

“We were excited by the priest and local Catholics’ services and decided to convert to Catholicism. We were baptized by Father Etcharren in 1967,” she said.

The French missionary moved them and hundreds of other families to take refuge in a church in Da Nang to escape fierce fighting between US-backed South Vietnam forces and communist troops in 1972. The following year, they accompanied the priest to settle in what is now Binh Thuan province.

Sister Tuyet joined the Lovers of the Holy Cross of Hue congregation and provided pastoral care for parishes in Thua Thien Hue province.

The nun, who now works at the National Shrine of Our Lady of La Vang in Quang Tri province, did not meet the missionary who saved her family and local people from the war-stricken area until 2018, when she attended the 60th anniversary of his ordination held in Hue.

“He still missed me, asking about my work and my relatives in Dong Ha Parish. I was impressed by the legendary missionary who worked hard to help people during the war,” she said.

The 67-year-old nun, who spent years working in her home province of Quang Tri, said she and other sisters looked for and cared for children with physical disabilities as their families could not afford to look after them.

The nuns set up a home for them in Dong Ha that now serves 34 disabled children. They also provide them with wheelchairs and walking canes while creating jobs for them to earn a living.

“We follow Father Etcharren’s inspiring examples of evangelization by trying our best to help people in need to live a happy life,” Sister Tuyet said.

Father Etcharren was forced to leave for France in 1975 after Vietnam was reunified under communist rule. He granted a significant number of scholarships to Vietnamese priests to study in France. He returned to live a retired life in Hue in 2010 at the invitation of Emeritus Archbishop Etienne Nguyen Nhu The of Hue until his death.

I am deeply grateful to Father Etcharren, who offered me the spirit of optimism and joy to serve other people

Saint Paul de Chartres Sister Mary Nguyen Thi Lanh, who worked with the late priest before 1975, said she learned honesty, punctuality and altruism from him while he taught at Hoa Thien Minor Seminary, where she served.

“He visited and gave us chocolate and cake in the seminary’s kitchen on Thursday afternoons after his teaching,” the nun said. “He was gentle, friendly and spoke the local dialect with us.”

Sister Lanh, 79, who is at a home for elderly sisters, said that in 1963 she started to work at a tuberculosis hospital in Hue run by Saint Paul de Chartres Sisters. Father Etcharren celebrated weekly Masses for sisters at the hospital, encouraging them to “give tender care to all people regardless of their faiths as they were also God’s children.”

Buddhists staged protests against the government led by the late Catholic president Ngo Dinh Diem, who was accused of discrimination against Buddhism.

“We tried our best to provide medical treatment for tens of injured protesters at the hospital,” she said.

Sister Lanh said she has followed Father Etcharren's example all her life by serving parishes and seminaries, attending to elderly people and mental patients, and preparing meals for ethnic students at church-run hostels in Da Nang and Kon Tum.

“I am deeply grateful to Father Etcharren, who offered me the spirit of optimism and joy to serve other people,” she said.

“My eyes filled with emotional tears when I heard of his death. I believe that God will reward him in Heaven, a missionary who lived for the Gospel.”