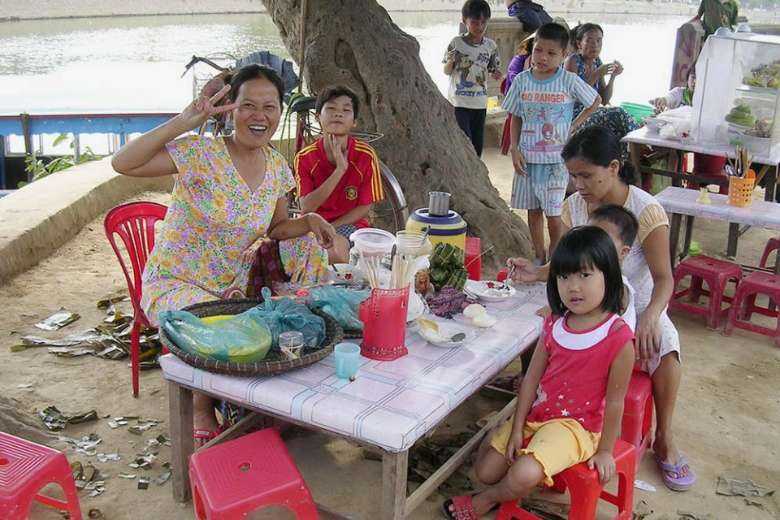 Truong Van Lenh contracted tuberculosis from fellow inmates while he was serving a nine-year sentence for drug trafficking.

After he was released from prison in 2017, he learned that his wife and two children had sold their property in Quang Nam province and left for other places, leaving him homeless.

His health deteriorated rapidly and he could not integrate himself into the community as his neighbors disrespected and kept clear of him because of his highly infectious illness and his status as an ex-convict.

In 2018, Lenh, a Buddhist, was sent to receive medical treatment at a state-run lung hospital in Da Nang, where he received free food daily from St. Paul de Chartres sisters and Catholic volunteers. The St. Paul de Chartres sisters are just some of the nuns from various congregations in the cities of Da Nang, Hue and Dong Ha who provide free food, emergency supplies and care for tuberculosis patients, people with HIV/AIDS and other patients in need at public hospitals.

"The nuns offered me 1 million dong (US$43) per month within six months so that I could pay the rent after I was back on my feet. They also gave me another 2 million dong to sell lottery tickets for a living," said Lenh, now 53, who uses a wheelchair after he lost his right leg because of complications from diabetes.

"I am over the moon now as I can earn 70,000 dong a day to put food on the table by myself, and I love my life," he told Global Sisters Report, adding that in the past, he had attempted suicide because he saw no future.

St. Paul de Chartres Sister Lucia Duong Thi Tam runs Peace Clinic in Quang Nam province. Three nuns provide free long-term treatment for 27 tuberculosis patients. Many of the patients have no permanent address or are homeless and have no personal papers, which means they cannot be admitted into public hospitals. Other patients include motorbike taxi drivers, lottery ticket sellers, used-item collectors, and cleaners at traditional markets.

"We have to ask for donations from benefactors to offer them food and medicine and transfer those who get worse to public hospitals," said Sister Tam, 55, adding that the nuns also buy public health insurance for many patients.

Since the clinic began in 2015, 135 patients have fully recovered from tuberculosis.

She said the nuns who work at parishes detect TB patients, pay them regular visits and take care of them, show them how to take medicine and make follow-up clinical examinations in time. They also offer them basic food and money. When a patient dies, the sisters also attend the funeral and console relatives.

Some of the nuns in Da Nang provide free food daily to 30 patients at a public hospital who could not afford to buy food.

"We also educate local people in TB infections, how to prevent the illness and to care for patients. We tell them that TB is curable, so they should love and help patients receive medical treatment early," Sister Tam said.

The Vietnam National Tuberculosis Control Program reported that an estimated 100,000 new TB cases are detected and given medical treatment annually, while another 50,000 new patients are undiagnosed. About 12,000 people in Vietnam die each year from the disease, higher than the death toll from road accidents. Tuberculosis patients die mainly because the disease is not discovered and treated in time.

The Southeast Asian country ranks 11th among the 30 countries with the highest number of TB cases globally and has made a political commitment to end tuberculosis by 2030.

Deputy Health Minister Nguyen Truong Son said in March that all tuberculosis patients are given free medicine by law, but patients must shoulder the financial burden of diagnosis and X-rays, other medicine, food and other costs, accounting for over 20 percent of their households' annual incomes.

He said there is still widespread discrimination against tuberculosis patients, which gives them an inferiority complex and causes them to hide their illness.

Mary Luong Thi Xuan Phuong of Hoi An said she caught scrofula, TB of the lymph glands, from her husband, who died of AIDS. Even though she was cured of her disease at a local hospital in 2019, she said her neighbors stayed away from her, and she was rarely invited to attend weddings and death anniversary parties. Few people sat at the same table with her, and people threw away chopsticks, dishes and other items she used.

"I am given a new lease on life since local nuns paid regular visits and consoled me," said Phuong, 42. "I attended a three-day course in tubercular prevention, basic information on TB and HIV/AIDS at their Binh An Clinic."

I regained my dignity and have a better life today, thanks to the generous support of the nuns who treat me like their relatives

Phuong, who teaches at a daycare center run by the St. Paul de Chartres sisters, now serves as a volunteer for the HIV/AIDS prevention program established by the Da Nang Diocese.

"I join with local nuns to teach Catholics from local parishes TB and HIV/AIDS prevention on the weekends," she said, adding that she and her son converted to Catholicism last year.

Huynh Thi Phung, who used to smoke heavily and caught TB, said she was cured of her illness and now earns up to 100,000 dong per day selling traditional food on the sidewalk in Da Nang.

Phung, 46, said she had to collect used things from the garbage for a living after serving a three-year term in jail for being involved in a prostitution ring in 2018, and her only son was kept in a detention camp for robbery.

"I regained my dignity and have a better life today, thanks to the generous support of the nuns who treat me like their relatives," Phung said with a smile.

St. Paul de Chartres Sister Agatha Le Thi Bich, one of two sisters who work at Lung Hospital in Quang Tri province, said each month the nuns give money to 47 patients, nine of them diagnosed with TB, to cover their hospital fees and food.

Sister Bich, a nurse, said they also work with outpatients and offer psychological advice so that they can overcome their challenges and pursue treatment.

"Poor patients are reluctant to receive hospital treatment, and their diseases consequently get worse," Sister Bich said. "We look after them with love and patiently walk with them in treatment."