Hundreds of Redemptorist youth missioners in Vietnam have been called on to bring God’s love to abandoned people.

Some 400 members of the Redemptorist Youth Ministry of Vietnam, a group of lay missioners led by Redemptorists, attended their first-ever gathering on Sept. 28-29 in Hue. Most missioners, aged 16-30, are from parishes run by Redemptorists throughout the country.

“You do have the life of Christ in yourselves, so please continue to bring Christian joy to other people for the future of the Church,” Father Joseph Nguyen Ngoc Bich, head of the Vietnam Province of Redemptorists, told participants.

The priest, who recently returned from Taiwan, said some Taiwanese Catholic groups who visited parishes in Vietnam have improved their faith life by following Vietnamese Catholics’ ways of living out faith.

They told him that they are inspired by Catholics in Vietnam who take part in church activities and attend daily morning Masses. They described Vietnamese Catholics as those who have Christ’s life, he added.

The superior of the 33-member province said churches in some countries had asked Vietnamese Redemptorists to send lay missionaries to serve them.

Father Bich said some lay youths will train as missionaries to do evangelical work abroad.

Redemptorist Father Vincent Mary Pham Cao Quy, head of the Redemptorist Youth Ministry of Vietnam, said the ministry’s mission is to bear witness to the Good News by serving the poor and abandoned. He said people face grave risks of abortion, sexual and drug abuse and domestic violence.

The priest said participants discussed action plans to preach the Word of God to their friends, visit and give material and spiritual support to domestic migrants, followers of other faiths, prisoners, street children, drug abusers and rape victims, and work with those who are losing their faith in life. 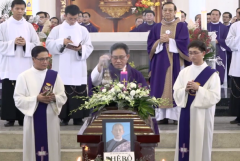 Mary Phan Thi Ngoc Anh, one of 60 youths from Thai Ha parish in Hanoi, said she had opportunities to strengthen her faith and express solidarity with other people during the summer.

“Our group helped ethnic villagers in mountainous areas build toilets and classrooms, and we installed pipes to carry water from streams to their houses. We get close to God and feel joyful through our services,” the 19-year-old said.

Father Quy said the gathering aimed to offer opportunities for participants to share their experiences in evangelization, cement their ties with one another, learn teaching and laws of the Redemptorist congregation, attend Mass and watch cultural performances. Participants paid 300,000 to 400,000 dong (US$13-17) each to cover travel and food expenses.

The Redemptorist Youth Ministry of Vietnam was established in 2017 by Redemptorists in Hanoi to participate in the Redemptorist mission “to follow the example of Jesus Christ, the Redeemer, by preaching the Word of God to the people.”