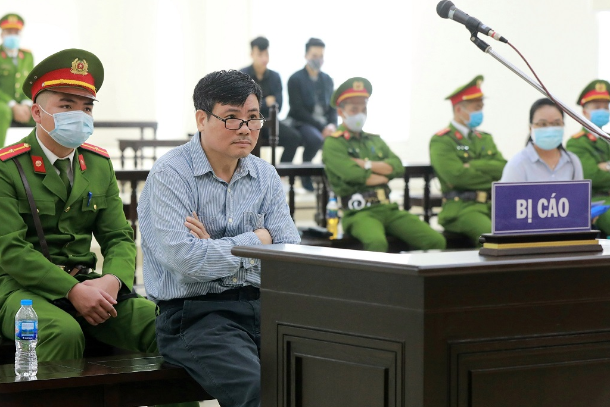 Rights workers have slammed a Vietnamese court for sentencing a well-known journalist and blogger to 10 years in connection with a fraud involving state property.

The People’s Court in Hanoi on March 9 convicted Truong Duy Nhat, former bureau chief of the state-run Dai Doan Ket newspaper, on charges of “abusing his position and authority in performing public duty.”

According to the conviction, in 2007 Da Nang authorities agreed to sell a 74-square-meter house to Dai Doan Ket to serve as its office. Nhat signed a contract with a construction company run by Phan Van Anh Vu, a property magnate. The company purchased and owned the house, while the newspaper had a lease to use part of it for 30 years.

In 2011, Vu closed the Dai Doan Ket office and paid the newspaper 1 billion dong (US$43,290) in compensation for the remainder of its lease.

The court accused Nhat, who was abducted while seeking asylum in Thailand and brought back to Vietnam in January 2019, of causing massive losses of 13 billion dong in the deal.

State-run newspaper Tuoitre reported that Nhut, 56, denied any personal interest in the deal. He said he had performed the task given to him by the newspaper’s editors, finding a proper working place in Da Nang.

“I did nothing wrong. If there was something wrong, the editor-in-chief took responsibility because I acted according to his authority,” the newspaper quoted him as saying.

Vu, who served as a senior lieutenant colonel in the police, was quoted as saying that Nhat negotiated the deal according to the wishes of the newspaper’s editors and did not receive any money from him.

Dang Dinh Manh, one of the two lawyers defending Nhat, said police filled the court while Nhat’s two brothers from Quang Nam province watched the five-hour proceedings from outside.

Manh said Nhat’s blog, A Different Viewpoint, is well known for its critical posts on political and social issues in Vietnam. Nhat denied the charges and told the judge that “I thank all people who pay attention to my legal fate. That gives me more strength and confidence to overcome this suffering.”

Lawyer Ngo Anh Tuan quoted Nhat as saying that the sentence is “vile political revenge” against him.

Thuc Doan, Nhat’s only daughter who studies in Canada, said on Facebook that her father is an honest journalist and abundant evidence proves his innocence, adding that the heavy sentence will not defeat his iron will.

Reporters Without Borders (RSF) said it was shocked to learn of Nhat’s sentence, noting that he has been punished for his independence and professionalism as a journalist.

“The grounds given for this extremely harsh sentence are totally unacceptable,” said Daniel Bastard, head of RSF’s Asia-Pacific desk. “The Vietnamese authorities manifestly wanted to make an example out of him by persecuting him in this way, and we therefore demand his immediate release.”

Nhat was first arrested in 2013 and sentenced to two years in prison for “abusing democratic freedoms” in his blog posts.

Vietnam, which was ranked 176th out of 180 countries in RSF’s 2019 World Press Freedom Index, is one of the world’s biggest jailers of journalists and bloggers.