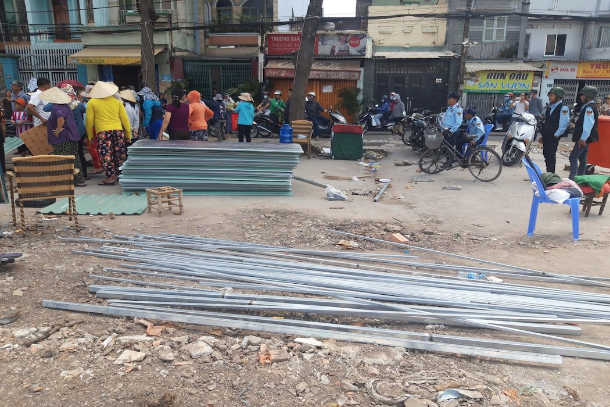 People prevent workers employed by local authorities from erecting structures on land they say is theirs on Feb. 17. (Photo from VRLH)

Victims of alleged land-grabbing in Vietnam’s Ho Chi Minh City have taken their fight to the national capital and are demanding the government punish local officials, who they say illegally destroyed their properties.

They also demanded that land seized from them be returned.

Representatives acting for more than 100 households, who claim their land was illegally seized last month by Ho Chi Minh City authorities, this week presented their petition to the Government Inspectorate Committee on Receiving Citizens Complaints based in Hanoi.

They said the victims have owned and cultivated vegetables on a 5-hectare piece of land called Loc Hung garden in the city’s Tan Binh district since 1954.

The local church gave them the area after they moved from northern provinces, they said.

They also said they paid taxes to the local government and have papers recognizing their right to utilize the land. However, petitions for local authorities to legally recognize the land as theirs have been ignored for 20 years.

Last month city authorities destroyed their homes and threw them off the land without any official notice.

In a letter to city officials, Nguyen Hong Diep, head of the complaints committee, urged Ho Chi Minh City authorities “to meet and hold a dialogue with the victims and do all they can to address their complaints.”

He also called on the city officials to inform the committee on the results of the talks.

Lawyers who have offered legal assistance to the victims were pessimistic over whether talks would take place. They accused city officials of not respecting people’s rights and had ignored requests by the victims to hold talks many times before. Complaints were ignored and threats were used to deter the victims from suing the government, they said.

“Despite this 94 of the households are determined to sue the government,” the lawyers said in a statement this week. “We call on city leaders to obey the laws and talk to the people to deal with their complaints.”

They also called on police to prosecute and punish officials who “disregarded the laws” and caused financial losses and emotional damage to the households.

Since the eviction in early January, those evicted have gathered daily to pray at a local Marian statue and prevented anyone else from erecting structures on the land.