Vietnam’s largest city today lifted its coronavirius lockdown to bring to an end nearly three months of restrictions on all activities to curb a deadly surge in the pandemic.

The city’s nine million people can leave their homes and all essential businesses can open, though restaurants can serve only takeaway meals. Cultural and sports services, weddings and funerals can be held with 15-20 participants.

Churches, temples and other places of worship will be allowed a maximum of 10 participants at one time, and 70 if they have been vaccinated fully or have recovered from Covid-19.

Binh called on migrant workers not to leave the city but stay to work. The city, which now has 600,000 migrant workers, will offer a cash dole equivalent to US$44 to each person rendered unemployed during the pandemic. They will be vaccinated and given jobs in the city.

Catholic volunteers including priests, deacons, seminarians and nuns have been serving those infected with the coronavirus for months now

The public security ministry has reported that the country’s four Covid-19 epicenters of Ho Chi Minh City and the neighboring provinces of Binh Duong, Dong Nai and Long An have 3.5 million migrant workers from other places.

Some 2.1 million of them want to return home due to the pandemic but the ministry has called on local authorities to ensure they stay back to avoid spreading the deadly virus in their native places.

Nguyen Sy Quang, deputy of the city’s public security department, said the city will maintain 12 checkpoints bordering other provinces and 39 other checkpoints in the districts to check public movements round the clock.

Ho Chi Minh City's health authorities said they are working to speed up large-scale tests among high-risk people, trace contacts and accelerate inoculation among workers and people over 50. Some 49 percent of the city's residents aged 18 and above have been fully vaccinated. 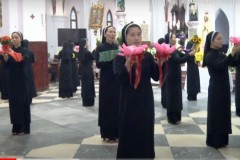 Catholic volunteers including priests, deacons, seminarians and nuns have been serving those infected with the coronavirus for months now.

“In protective gear, medics and volunteers help patients to recover from the disease,” he said of the 606 religious volunteers serving at the city’s various hospitals since July.

Tens of thousands of Covid-19 patients are still undergoing treatment in Ho Chi Minh City, accounting for 80 percent of Vietnam’s deaths and half of its 786,200 infections since the Delta variant outbreak detected in late April.