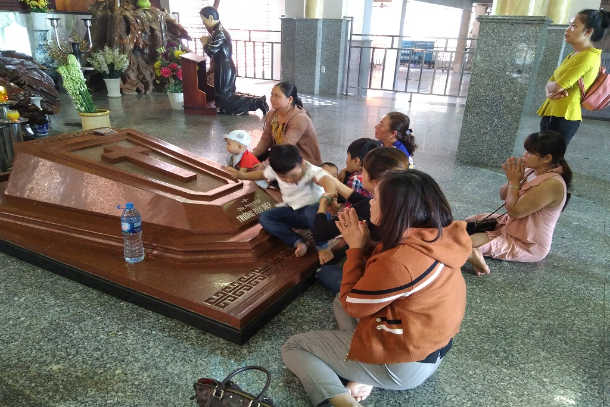 Many dioceses in Vietnam have called off pilgrimages, including the biggest one dedicated to a late indigenous priest in the Mekong delta, due to fears over the coronavirus outbreak.

On Feb. 12, Bishop Stephanus Tri Buu Thien of Can Tho announced that the coming celebrations to mark this year’s 74th anniversary of the death of the Servant of God, Father Francis Xavier Truong Buu Diep, would be canceled.

Tens of thousands of pilgrims, including people of other faiths, visit his tomb at the Pilgrimage Center of Tac Say in Bac Lieu province to mark Father Diep’s death anniversary on March 11-12.

Bishop Thien said the cancelation is due to the novel coronavirus —  officially called COVID-19 – sweeping the country and there is a high risk of infection at crowded festivals and pilgrimages.

He requested all 141 parishes in the diocese to hold the priest’s death anniversary celebrations at their churches, urging them to pray for scientists to speedily find ways to stop the deadly epidemic.

“We deeply pray to God, via Father Diep’s intercession, to cure those who have been infected, make patients recover soon and pray for those who died from the virus as well as their relatives,” he said.

Father Diep, pastor of Tac Say parish, was arrested on March 12, 1946, along with 60 parishioners. His body was found a few days later and is now buried at the most popular pilgrimage center in the Mekong delta. He was 49 when he was killed.

Vietnamese bishops have proceeded with the Cause of Father Diep since 2012.

Today provincial authorities placed 10,600-member Son Loi commune under quarantine due to fears over the spread of the coronavirus. They are given 40,000 dong (US$1.70) per day each. The commune has five patients.

Five Vietnamese and two Chinese patients have been cured of the pathogen.

On Feb. 11, Bishop Joseph Dang Duc Ngan of Da Nang in central Vietnam decided to call off the diocesan pilgrimage to Calvary Hill in An Ngai parish on Ash Wednesday, Feb. 26, to avoid spreading the epidemic among the community.

On Feb. 5, Phan Thiet Diocese canceled all Masses and pilgrimages held at Our Lady of Tapao Center to prevent the lethal coronavirus outbreak from spreading.