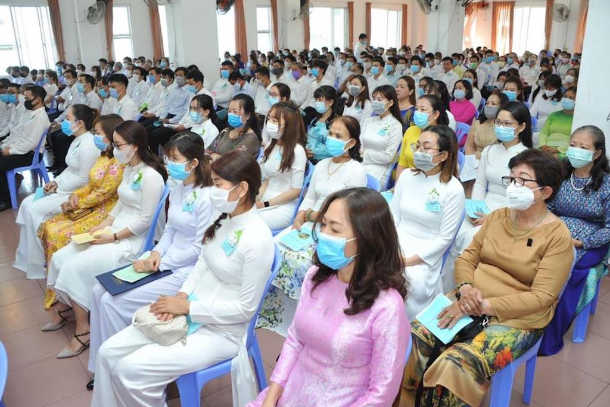 “Priests in other areas of the province have to celebrate Masses briefly and limit gatherings at churches,” said Father John Vianney Duong Nguyen Kha, head of Phan Thiet Diocese’s Office.

He said people should wear face masks and wash their hands with disinfectants while they attend Masses and go to confession at churches. They are urged to pray fervently for the deadly pandemic to end soon.

Father Kha said granting general absolution to Catholics is not encouraged yet, so priests have to wear masks and protective gloves to hear confession and administer anointing of the sick so as to avoid infection.

The 40-year-old diocese made the announcement after the city, a famous tourism destination, confirmed nine coronavirus cases. A 51-year-old businesswoman was reported to be the main infectious source after she returned home on March 2 on flights from the US and tested positive for Covid-19 on March 9.

State-run VTC News reported that the woman spread the disease to 10 other people and had close contacts with 203 other people who made contact with 761 other people.

The online newspaper said the woman, who made an untrue declaration of her journey after returning home, could face a fine of 200 million dong (US$8,600) or a sentence of 1-12 years in jail.

Parishes of Sao Mai Vinh Hoa in the city decided to cancel Masses after two members had contact with infected patients.

Vietnam is denying entry and stopping issuing tourist visas to citizens from Europe for 30 days starting from March 15.

All passengers coming from or through China, South Korea, the UK and Schengen countries will be compulsorily quarantined and tested for coronavirus.

The health ministry said on March 15 that Vietnam has 57 confirmed coronavirus cases. The latest patients are two British nationals, a German and a Lithuanian.

Some 30,000 people are being quarantined or monitored at their homes and hospitals. There have been no deaths in the country and 16 patients have recovered.