As overworked laborers who left farm jobs for the city get estranged from their faith, one parish is making a big difference 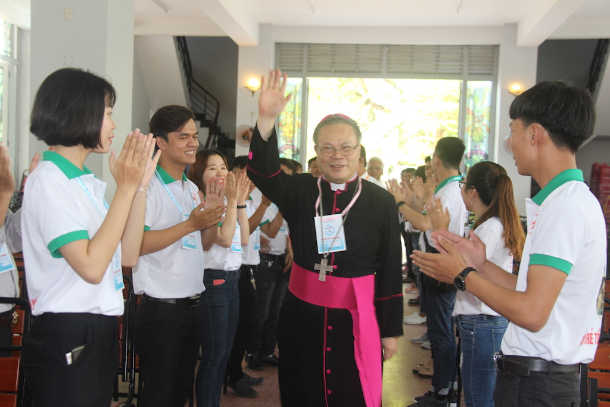 An archdiocese in central Vietnam has rolled out pastoral care activities to serve domestic migrant workers who have been forced to neglect their faith due to the demands of trying to earn a living.

Archbishop Joseph Nguyen Chi Linh of Hue said the May 1 gathering, labeled as "Our Lady of La Vang Binds Migrants and Countrymen," had been arranged for the first time with the aim of "uniting them and guarding their faith."

Archbishop Linh, president of the Catholic Bishops’ Conference of Vietnam, said most of the migrant workers lack ties with one another because they spend all their time working hard for a living in the city.

He said most people from his archdiocese suffered the heaviest loss of life during the Vietnam War, especially the bloody Tet Offensive carried out by northern communist forces in 1968.

After the war ended, the majority went to work on farms earning a subsistence wage.

The prelate said many were forced to seek better-paid jobs in southern provinces and cities.

"The local Church is so proud that many of you have become priests and nuns, completed your tertiary education, and achieved so much in life," Archbishop Linh told those at the gathering to help the migrant workers.

He asked them to give newcomers material and emotional support, including jobs and accommodation.

The 70-year-old said the archdiocese set up a center for migrants in the city. "It will provide migrants with pastoral activities, catechism courses for couples, and legal procedures."

He said the center would also erect a site to give them information relevant to their lives, provide training for workers, and help them integrate into the parishes where they live.

Francis Xavier Tran Cong Thuy, who joined the gathering, asked the church to assign a priest to journey with young people who have either become corrupted by consumerism, have lost their moral compass, or who feel plagued by feelings of loneliness.

A 23-year-old music teacher who gave his name as Thuy agreed.

"Retreats, meetings and activities should be held regularly for us so we can deepen our faith and avoid (resorting) to drink, drug addiction, abortions, premarital sex, or divorce," Thuy told ucanews.com while attending the gathering.

Father Francis Xavier Ngo Phuc, the pastor of My Hoa Parish in Ho Chi Minh City, said local Catholics encourage migrants to join the parish and related associations, have their children baptized, and attend catechism courses at the parish.

They teach catechism to couples and help troubled families reconcile.

Father Phuc, 75, said they also provide coffins and hold funerals for migrant workers who have no money or relatives to send them off.

"We have a duty to welcome them and journey with them," he said.

One migrant worker at the gathering, who gave her name as Tuyet, said she and her husband were too busy working all the time to make ends meet and provide for their two children.

"My husband and I haven’t been able to go to confession or attend Mass since we moved here," the 30-year-old said.

"This gathering brought us together with others who are in a similar situation," she said.