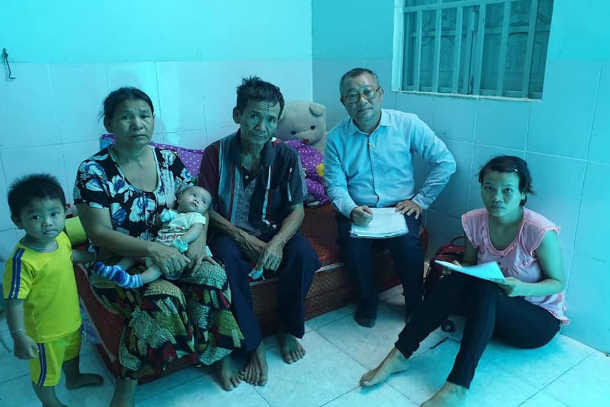 Lawyer Dang Dinh Manh, (second from right) visits the parents and siblings of defendant Tu Cong Nghia at their home on March 16 before the appeal hearing. (Photo courtesy of Co Muoi Ho Le)

A court in southern Vietnam has rejected appeals against the conviction of five rights advocates in a hearing described by activists as the communist government’s revenge on dissidents.

The newspaper said Luu Van Vinh, Nguyen Quoc Hoan, Nguyen Van Duc Do, Tu Cong Nghia and Phan Trung, who is a Buddhist monk, were sentenced to 15, 13, 11, 10 and eight years in prison respectively for “activities aimed at overthrowing the people’s government.”

The defendants, aged 26 to 52, were accused of founding a reactionary group called the Vietnam National Coalition and inducing other people to enter their group.

Defense lawyer, Dang Dinh Manh, said all defendants told the judge that they were innocent of any crime and demanded the court free them.

He quoted Vinh, 52, as saying that communist authorities commit crimes and would answer for them to the people in the future. Do was quoted as saying that he was a victim of police dishonesty.

The lawyer said the defendants cried out “Down with the court, down with communists!”

Nhi Be Hoang, a relative of Do, said the trial showed that the government was taking revenge on dissidents.

Vietnam-based Brotherhood for Democracy said in a statement that Vietnamese citizens have rights to exercise their political freedom in a peaceful manner to change the authoritarian communist regime into a multiparty and democratic system.

Christian rights lawyer Nguyen Van Dai, head of the group, said a people’s government has not existed in Vietnam since 1975 when the country was reunified under communist rule.

He also strongly condemned the government for sentencing five peaceful political activists and described its acts as “a crime and inhumanity against the people.”

Dai called on the government to free all the defendants immediately and unconditionally.

In January, religious and civil rights groups petitioned European Union bodies to delay ratifying a free trade agreement with Vietnam until concrete improvements are made regarding human rights.