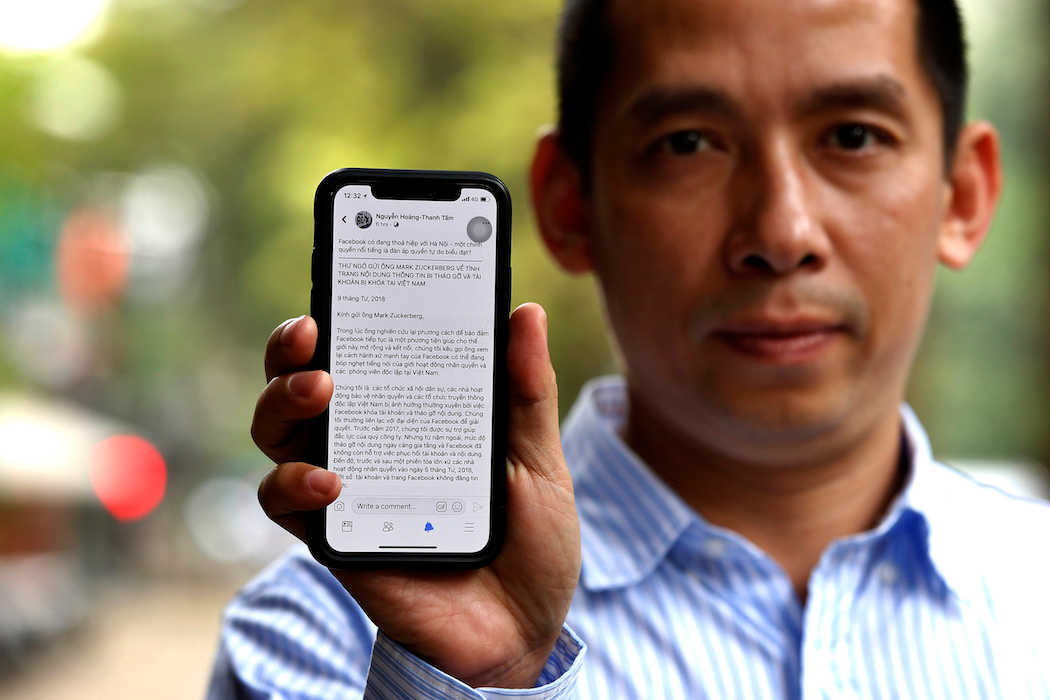 Vietnamese activist La Viet Dung holds a phone displaying an open letter to Facebook chief Mark Zuckerberg in Hanoi on April 10. The letter suggests Facebook may be colluding with communist authorities to scrub out online dissent. (Photo by AFP)

Activists and netizens in Vietnam claim a contentious law on cybersecurity is a legalized step to clamp down on dissident voices and rights advocates.

On June 12, the National Assembly passed the Cyber Security Law, the first law to regulate "all activities that protect national security and ensure public safety and order on the internet" and the responsibilities of relevant agencies, organizations and individuals.

The 43-article law demands all internet-related service providers establish branches or representative offices and data centers in Vietnam, where domestic users' important information must be stored.

Internet service providers, including Facebook and YouTube, will be asked to remove "anti-state, offensive, slandering or inciting" contents from their platforms within 24 hours of receiving requests from authorities or police.

The law, which takes effect on Jan. 1, 2019, will allow the Ministry of Public Security to have the jurisdiction to examine the customer database of any organization or company when a breach of national security or a threat to social order is detected.

The law also bans internet users from "distorting history" and "denying revolutionary achievements." They are not allowed to gather people for anti-state purposes, to divide the national bloc, spread false information or cause religious offence.

An IT expert at a company in Ho Chi Minh City said the law is a legal tool to closely supervise and track people. "The law aims to defend the communist regime with ways of encroaching on personal life, threatening, isolating and gagging citizens," he added.

He said trying to prevent people from speaking ill of the Communist Party and state does not ensure cybersecurity but only poses risks of losing network security and hindering economic development.

Internet users in Vietnam suffered cyberattacks costing US$540 million in 2017, according to Bkav Corporation, a security firm based in Vietnam.

With a population of 94 million, Vietnam had 64 million internet users in 2017, the sixth highest number in Asia, according to VTV.vn.

The expert said the regulations go against global trends in freedom of speech, roll back the democratic process, create barriers to freedom of knowledge, and discourage foreign firms who want to invest in Vietnam.

IT and rights organizations and tens of thousands of people have petitioned the government to drop the contentious law.

Le Hieu Dang Club, whose members are former Communist Party members and authorities who work for freedom and democracy, said the law severely violates the constitution and international laws on human rights that Vietnam has signed.

"The law puts citizens' freedom of speech and information into the government's control and offers authorities another weapon to confront dissident voices," the club said, adding that the law was intentionally composed by the Ministry of Public Security.

Pham Doan Trang, a leading Facebooker with about 47,000 followers, said she was not too disappointed by the law. "Technically, internet users will find various ways to protect themselves from the bad government's laws and to use the internet for their freedom of information and expression," she said.

Trang, who is closely watched and regularly interrogated by police, said the authoritarian government does not have enough personnel and money to detain and persecute hundreds of dissidents for their views.

"I will continue to publicly criticize the ruling party and forces who try to defend it [the new law] and oppose the people," Trang said on social media. "I will be happy if I become one of the first people imprisoned by this law."

Many netizens called on people to take to the streets across the country to oppose the law.

Amnesty International has written a letter to the chief executives of Apple, Facebook, Google and Microsoft and to the chairman of Samsung outlining its concerns about the law and urging the companies to exert pressure on Vietnam's government.