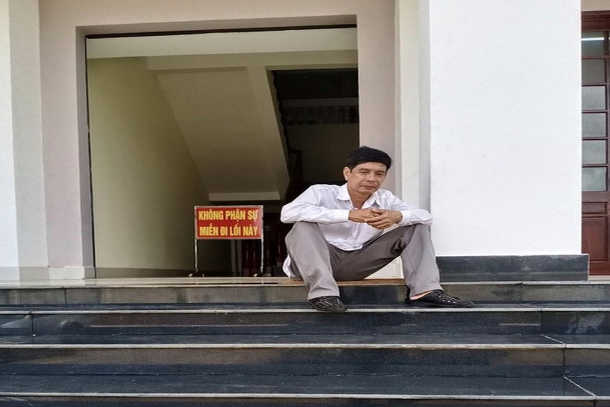 Luong Huu Phuoc sits in front of the court building before his appeal trial on May 29 in Dong Xoai city. He later committed suicide after complaining of unfair treatment. (Photo courtesy of Duong Vinh Tuyen)

A high court in southern Vietnam has dismissed prison sentences given to a farmer who killed himself in protest over unfair treatment and asked for an extensive investigation.

On June 5, Quang Duc Tuyen, deputy chief judge of the High People’s Court based in Ho Chi Minh City, canceled the jail sentences imposed by lower courts in Binh Phuoc province on Luong Huu Phuoc, who was convicted of violating road regulations and causing the death of his friend Tran Huu Quy.

Phuoc committed suicide at the court building on May 29 after the People’s Court of Binh Phuoc Province upheld his three-year jail sentence.

Investigators have been asked to clarify the speed at which Lam Tuoi was traveling when his motorbike crashed into Phuoc’s motorbike on which Quy was seated in 2017. Tuoi, who was drunk and did not have a driver’s license, said he was traveling at a speed of 50-60 kilometers per hour while witnesses said he was going “very fast.”

Tuoi also confirmed that he saw Phuoc’s bike at a distance of 50 meters but when he was five meters away, he saw Phuoc was doing a U-turn and could not avoid Phuoc’s motorbike. Documents reported that there were no signs of Tuoi applying his brakes.

They have to determine why Tuoi did not reduce his speed and deal with the situation before the fatal accident. The exact place where the two motorbikes collided also needs to be determined to see if Tuoi was in the right lane.

Tuyen said previous investigators did not explain if Phuoc switched on a blinker while he was making a U-turn.

Activists and lawyers said Phuoc’s death has awakened high courts and forced them to review his tragic case only one week after his death.

Before taking his life, the defendant posted a final message on Facebook stating: “If my death awakens Binh Phuoc provincial judiciary, it is a very deserving cause.”

Phuoc complained many times that he was treated unfairly and the courts did not catch the real criminal but no one cared.

Activists said it takes many months or even years for higher courts to decide to reconsider controversial cases.

Duong Vinh Tuyen, Phuoc’s lawyer, said it is necessary for the high court to closely examine documents and fully assess evidence before it reconsiders the case. In doing so, Phuoc and Quy could be treated fairly.

Tuyen suggested the jury reconsider the case and declare Phuoc innocent since “he did not cause the deadly accident and did not create conditions for Tuoi to cause the accident.”

He said failure to prosecute Tuoi is a sign of failing to charge the real guilty party.