Relatives of the three defendants stand outside the court in bitter weather in Hanoi on Jan. 31. (Photo courtesy of Le Thang Long)

A court in Vietnam has imposed heavy sentences on three right activists including a law student for conducting an anti-state campaign as the communist government tightens its grip on power.

The People's Court of Hanoi City on Jan. 31 sentenced Tran Hoang Phuc, 24, to six years in prison and another four years' probation.

Phuc is a student at Ho Chi Minh City University of Law and a member of the Youth Southeast Asian Leaders Initiative, the U.S. government's signature program to strengthen leadership development and networking in Southeast Asia.

Thuan and Dien were arrested last March and Phuc was arrested last June for publishing material on the internet critical of the government.

The court charged the three defendants with posting 17 video clips on social media to "defame the people's government, spread false information and distort the truth."

They were also found guilty of spreading other material smearing political, economic and social issues.

Many police and security officers in plain clothes guarded the court and prevented defendants' relatives and supporters from entering the public trial.

Dang Dinh Manh, one of seven defense lawyers, told supporters that the court had imposed longer sentences than those suggested by the People's Procuracy.

"The Vietnamese government should immediately drop all charges and release the rights activists," Human Rights Watch said on Jan. 30. 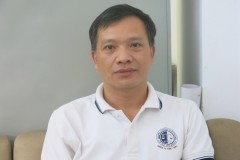 The three defendants "are among a growing group of bloggers and activists who use the internet to advance human rights and democracy in Vietnam," said Asia director Brad Adams.

"Arrest and imprisonment of dissenting voices will not stop the increasing number of Vietnamese from speaking up."

At the Public Security Ministry's national conference on Jan. 15, Communist Party chief Nguyen Phu Trong urged the ministry to stick to the party's leadership and policies and protect national security.

Trong also asked the ministry to stop "hostile and reactionary forces" and prevent the establishment of political opposition groups.