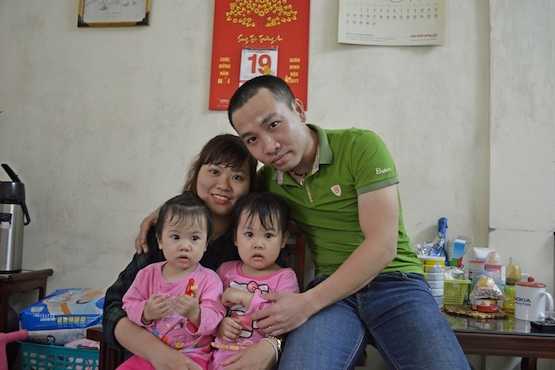 Truong Thu Huong and her family in Hanoi. Under current laws, if they had a third child Truong says she would be penalized by her employer, a state-run hospital. (Photo by Ate Hoekstra)

With big smiles on their faces the two daughters of Truong Thu Huong and her husband Hoang Anh run playfully through the living room of their small house in Hanoi. Two-year-old Gia stumbles and falls against the floor with a smash. Without complaint, the girl gets back on her feet. Three-year-old Thao stares at the television for a few seconds before quickly returning her attention to the toys scattered about the floor.

Truong, 26, looks at her kids lovingly. As a family of four, she's as happy as can be. Still, there is a part of her that would like a third child. However, the punishment under Vietnam's two-child policy would lead to her being penalized by her employer, a state-run hospital.

"If I had a third child, they would punish me by withholding my bonus for two years," Truong says.

Vietnam's two-child policy has been in place for over 50 years. But an end to the law is in sight. The country is ageing rapidly. According to the World Bank's forecasts, the country will have three times more people aged over 65 in 2040 than it does today. To deal with the age demographic crisis, the Ministry of Health announced earlier this year that parents could decide themselves how many children they wish to have, and that it's time to abolish the law.

Less harsh than the child policy in neighboring China, the law mainly affects the hundreds of thousands who work for the government or are employed by state-owned enterprises. The punishment for breaking the law differs for each organization. Some are held back, seeing a long-promised promotion go up in smoke. Others are fired on the spot.

Anna Trinh Thi Y, a Catholic woman, who works for a state-run bank in a southern province, said she was punished when she had her third child 14 years ago.

Thi Y said she had her bonus cut and lost the chance to get a promotion for years after.

The 50-year-old said she used contraceptives for years to avoid being pregnant. "If I violated the two-child policy, I would be dismissed and fail to support my family," Thi Y said adding that she did not know, until early this year, that contraceptive use is against church teachings. A file image of a Vietnamese mother with her children on a motorbike during the mid-autumn festival in downtown Hanoi. (Photo by AFP)

The Communist Party has ruled the country for decades now. For its 4 million members, the birth of a third child often means they are forced to surrender their party membership and the many privileges that come with it.

The state's policy was introduced during a time of economic hardship and war in the 1960s. The birth rate was high, particularly in rural areas. The government feared that the country would fall into deeper poverty if it failed to act against the rapid population growth. Sanctions were used to enforce the new policy, propaganda used to win its support.

Nowadays, Vietnam is one of the fastest growing economies in the world. However, the government believes that to remain economically competitive, it needs to encourage families to have more children to ensure a strong labor force in the future. Its current population of 95 million is expected to increase to 100 million by 2025. The population growth rate was reduced from 1.5 million in 2006 to the current 900,000 per year, state media reported.

Pregnancies that end with an abortion

Sitting in a cafe in a busy street of Hanoi, Nguyen Mai Lien gives her full backing to the abolition of the two-child policy. The mother of two boys works for an international non-government organization and explained that she doesn't feel much pressure from the policy. But most of her friends have no more than two kids and she regularly hears about the penalties.

"A friend of mine works for a state-owned organization that works to protect the forests. When he became the father of a third child, he was immediately fired. Then there are lots of organizations that won't give you maternity leave for a third child," she says.

Ending the two-child policy could also lead to a better mix of boys and girls, which is currently unbalanced at 100 girls for every 112 boys. One of the main reasons is the high number of abortions. Three years ago, doctors from Hanoi's Central Obstetrics Hospital reported some 40 percent of all pregnancies end in an abortion. On average, every Vietnamese woman of a reproductive age undergoes 2.5 abortions, the doctors say.

Abortions often happen because Vietnamese families prefer a son who will keep up the family name. When a woman finds out she's pregnant with a daughter a decision is often made to terminate the pregnancy, even though the law doesn't allow an abortion for that reason.

Many believe there will be fewer abortions once the two-child policy is abandoned. Nguyen Mai Lien agrees. "Currently, girls are often discriminated against because of their gender," she says. As a mother of two sons, Nguyen sometimes hopes her financial situation will make it possible to grow her family by one more child.

"It won't matter to me if it's a boy or a girl," she says. "Of course, after two boys a girl would be very nice. But I would be happy with another son as well."

Thi Y said she knows many Catholic women who have had abortions because of the two-child policy and the associated fear of losing their jobs.

"They quietly have abortions without getting advice from priests," she said.