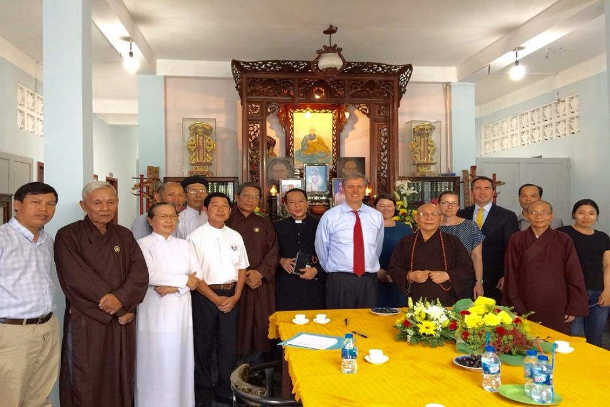 Religious dignitaries from groups not recognized by the government present their reports of violations to American diplomats in Ho Chi Minh City, in May. (Photo supplied)

The Catholic Church in Vietnam has organized a series of pastoral activities for victims of violence based on their beliefs.

The Episcopal Commission for Justice and Peace and the Catholic Bishops’ Conference of Vietnam are together asking that all dioceses and congregations around the country celebrate special Masses and Eucharist adoration on Aug. 22 to mark International Day Commemorating the Victims of Acts of Violence Based on Religion or Belief.

Catholics “should pray for religious freedom to be exercised in our country [and that] victims of violence and religious persecution be in peace and dead sufferers be in Heaven,” the commission declared. They are also asked to pay visits and offer spiritual and material support to victims’ families in their communities.

The statement, signed by the commission’s secretary, Father Joseph Mary Le Quoc Thang, notes that although there is no brutal repression on a grand scale in the communist-ruled country, “freedom of beliefs and religion is not really considered a human right but only a favor needs to be asked for [by followers] and granted [by authorities.]”

Religion as a human right

Father Thang says the event aims to show solidarity with the U.N. General Assembly, which decided to designate Aug. 22 as a special day for victims of violence due to their religious beliefs.

The General Assembly recalled that countries have a primary responsibility to promote and protect human rights, including the human rights of people belonging to religious minorities, including their right to freely exercise their religion or belief.

Father Anthony Nguyen Van Dinh, head of the Vinh Diocesan Committee for Justice and Peace in north central Vietnam, said violation of religious freedom was rampant in many areas in the country.

“Many individuals, families and organizations are discriminated against unfairly, terrorized and imprisoned for practicing their faith or expressing their beliefs,” he said.

Father Dinh also called on all parishes to gather at churches to pray for religious freedom to be carried out throughout their nation.

In recent years, many Catholics in the diocese have been jailed and harassed for speaking out against religious persecution, environmental pollution, social injustice and violations of human rights.

The Vietnam-based Association to Protect Freedom of Religion recorded 20 cases of religious violations around the country during the first six months of 2019.

Vietnam has recognized and granted licenses to 43 religious organisations belonging to 16 religions which have about 26 million followers, including nearly 56,000 dignitaries and more than 29,300 worship sites, according to the Government Committee for Religious Affairs.