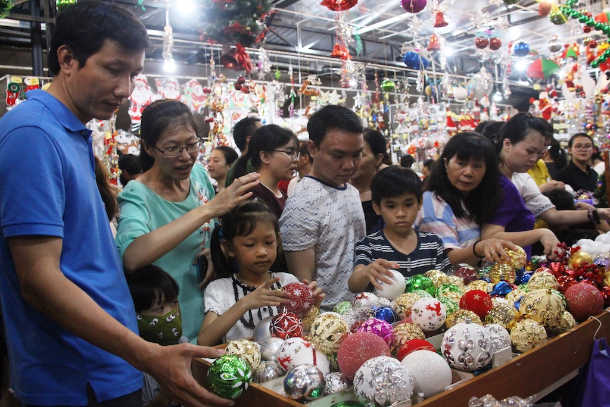 A church commission has called on Catholics in Vietnam to hold recreational activities and welcome people of other faiths to Christmas as a way to bring the meaning of the season to them.

Father John Baptist Truong Thanh Cong, a member of the Vietnamese bishops’ Episcopal Commission for Evangelization, said Christmas is a golden opportunity for Catholics to introduce their values to other people.

Father Cong said many people of other faiths and even atheists stream to churches throughout the country on Christmas Eve when they can see Christmas lights, trees, nativity scenes, cultural performances, nativity plays, carols and celebrations for entertainment.

The priest, who has practical experience in evangelization, said it will be hard to find another chance to approach and share Christmas joys with them if Catholics let them come and go without attention.

“Christmas is for all people and Christmas joys should be shared widely,” he said in suggestions published on the Vietnamese bishops' site.

Father Cong, 65, said if people of other faiths are warmly welcomed, they will get good impressions of Catholics and Christmas and be ready to open their hearts to listen to God’s messages.

The priest urged Catholics to make use of Christmas to introduce Catholicism to other people, build good relationships and help them to get close to churches.

He suggested that at parishes children dressed as Santa Claus or angels should visit and offer gifts such as fruits, cakes and Christmas cards to families, public agencies and religious places. They can sing carols to serve people.

Father Cong, pastor of Rach Vop parish in the southern province of Soc Trang which is home to ethnic Khmer and Chinese who are Buddhists, said Catholics should invite people of other faiths to attend Christmas celebrations and explain the meaning and signs of Christmas to them.

He asked parishes to voluntarily erect nativity scenes at public places, restaurants, schools and houses so as to bring the Christmas spirit to other people. They should hold cultural performances and games for their visitors.

They should organize meals at low cost or without charge for all participants at churches and offer Christmas gifts.

Many parishes in Ho Chi Minh City Archdiocese have already erected nativity scenes and decorated churches with lights and flowers to attract people. They will hold Christmas parties, carol concerts and offer gifts to people in need as way to spread Christmas joys and meanings. Government authorities are also invited to attend these activities.

The Church in Vietnam serves seven million Catholics out of a total population of 96 million. Christmas is not a national holiday in the communist country.