Anthony Huynh Phong from Vinh Linh looks after the cow he bought with the financial help of Lovers of the Holy Cross nuns after he lost three cows in devastating floods. (Photo: UCA News)

Martha Truong Thi Ai had to stay at her parents’ house after her leaf-and-bamboo house was washed away during severe floods in Vietnam last October.

Ai, a clothes mender who lost her sewing machine in the floods and became jobless, and her speech-impaired husband earn only 35,000 dong (US$1.50) a day from making bamboo chopsticks and selling them at a market in Quang Dien district of Thua Thien Hue province. They wear clothes given to them by other people.

The 31-year-old mother of one said they built a new house costing 70 million dong ($3,000) with the financial support of Catholic charity Caritas in Hue. They moved to the 40-square-meter house with brick walls and iron sheets on Jan. 1.

“We are extremely excited to have the new house on the New Year and the Feast of Mary, the Mother of God,” Ai said, adding that it was a truly historic occasion in their life and they are grateful to the local Church for making their dream come true. 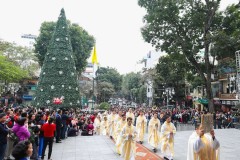