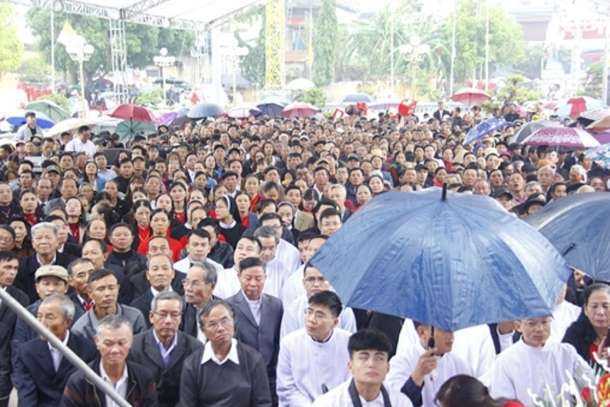 Catholics throughout Vietnam celebrated the solemn feast of the Vietnamese Martyrs, their ancestors, on Nov. 15. The feast, which is usually observed on Nov. 24, was held earlier this year so that people could attend as the next Sunday is the feast of Christ the King.

The martyrs are patrons of the local Church. They are comprised of 21 foreign missionaries and 96 Vietnamese. Nearly half of the Vietnamese martyrs were laypeople including mandarins, officials, military officers, soldiers, businesspeople, medical workers, fishermen, carpenters, joiners, tailors, weavers and farmers.

The martyrs are the fruits of the endless efforts of evangelization by foreign missionaries who introduced Catholicism to the country in 1533.  Catholicism was known as a religion of love among local people.

The martyrs were tortured and killed for refusing to abjure the faith from 1745 to 1862 and Blessed Andrew of Phu Yen, known as the “Protomartyr of Vietnam,” was put to death in 1644. They were wrongly charged with embracing a foreign religion, fighting against the government and betraying their nation.

Church documents revealed they were always kind and friendly and won the hearts of all people including jail officials who mistreated them. A prison guard told Father John Doan Viet Dat (1765-98): “I see you are good and wise and wanted to begin a fraternal relationship with you but you will be executed soon. I promise to give you a coffin as a way to hold you in respect.”

Most local Catholics survived persecutions which killed an estimated 300,000 people during the 17th, 18th and 19th centuries thanks to officials and people of other faiths who hid and protected them from soldiers.

Then Catholics firmly stuck with their nation, worked hard for a living, helped people in need, lived Christian values, were loyal to church teachings and bravely accepted death for their faith. They supported and respected the government, forgave those who harmed them and strongly rejected groundless accusations against Catholicism.

“Catholicism not only bans its followers from fighting against the government but encourages them to pray for and make contribution to the country’s security and prosperity,” Father Thomas Ngo Tuc Khuong, 80, told authorities before his death.

Father Thomas Vu Ba Loan, who was killed in 1840, said: “I do not embrace a religion from a foreign country, I only worship the God of all peoples.” Bishop Feliciano Alonso Phe stated that Catholics’ weaponry in their struggle against religious persecution were “not guns and swords but faith, prayer and charity.”

Martyr Francis Nguyen Van Trung, an officer and father of four who was beheaded in 1858, showed his patriotism by declaring “I am a Christian and ready to fight against the country’s enemies but never give up my faith.”

Now Catholics are called on to follow their antecedents’ shining example to bear witness to Christian values by fulfilling their civic duties to build the country and condemning social injustice and rights violations in their daily work in a fast-changing secular society.

Today martyrdom does not mean Christians suffer bloody execution but means they bravely hold onto Christian teachings that are against growing secular trends in an atheistic society. They must be loud critical voices for justice, charity and solidarity.

They should stand by and protect the voiceless and marginalized, especially those who lose their livelihood due to environmental pollution caused by commercial exploitation of natural resources or are unfairly evicted from their land and jailed for expressing peaceful views on social injustice. Land grabbing and pollution are burning questions in the Southeast Asian country.

It is their duty to combat rampant corruption by at least refusing to pay bribes to authorities for their private interests and working with other people with goodwill to curb the national problem.

Martyrdom is to make first choices of Christian values and the common good rather than private profit every day of one’s life.

They are invited to work for the common good and lead a life of selfless service to communities by resisting temptations to sate sexual lust, earn private profit, hold entrenched secular power, and treat disadvantaged people with indifference.

Their activities aim at getting the message across to all people including communists and atheists that Christianity is a religion of love. Its followers really love the nation and work hard to build a better society of humanity, charity, solidarity, fraternity and sympathy.

I see many officials who admire Catholics’ good deeds and serious commitment to the voiceless embrace the religion and struggle for social justice. In doing so, the concept of martyrdom will be understood well and fully in the modern age.

In recent years, many Catholics including intellectuals have publicly declared their faith identity and commit to Catholic teaching after they attended courses in catechisms and church social teachings. In the past many fearfully denied the faith for personal prospects and interests.

It is good news for the local Church with around 7 million members out of Vietnam’s population of 96 million.