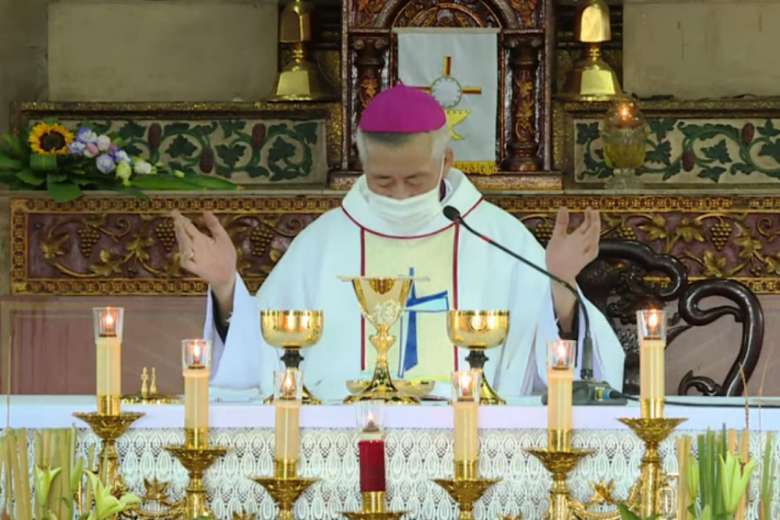 Catholics from Vietnam’s northern diocese of Vinh have appealed for St. Anthony of Padua’s intercession to contain the coronavirus pandemic raging in the country.

Nine-day novena prayers and Masses were organized at the St. Anthony of Padua Pilgrim Center in Trai Gao in Nghi Loc district of Nghe An province. The novena ended on Aug. 11.

Only a few nuns, seminarians and Catholic association members were present due to social distancing measures. They recited St. Anthony’s prayers, the rosaries and Divine Mercy prayers.

During the novena, local Catholics prayed for world peace and for the pandemic to end soon.

Peter Nguyen Cong Lich from Xa Doai Cathedral Parish said his family attended all online services during the novena. “St. Anthony is known for loving those who are in misery, so we completely trust in him to save our country and the world from the deadly pandemic,” he said.

We must absolutely trust in God, who will definitely save us

Bishop Long said the ongoing outbreak has infected hundreds of millions people and left a number of others out of work around the world. Catholics’ faith has been affected by the suspension of religious activities.

“We must absolutely trust in God, who will definitely save us,” the prelate said as he called on the faithful to show “Christian charity to those who are affected worse than us.”

He praised those who provided food, water and other basic needs for migrant workers who rode motorbikes from the southern provinces after the contagious Delta variant outbreak to reach their homes thousands of kilometers away.

Poor workers including lottery ticket sellers and motorbike taxi drivers suffered a lack of food due to movement restrictions. Many people had to walk home as they had no money to take buses or trains. Emeritus Bishop Hop of Ha Tinh said his diocese had supplied tonnes of food and 5 billion dong (US$217,000) to Covid-19 victims in Ho Chi Minh City, one of the country’s epicenters for the virus.

St. Anthony was born in Lisbon, Portugal, on Aug. 15, 1195. He was ordained a priest and later became a Franciscan friar. He was widely acclaimed for his outstanding preaching, undying love for the poor and sick and expert knowledge of scriptures.

He died in 1231 at the age of 35 in Padua, Italy, from a chronic case of edema. He was canonized by the Vatican a year later and in 1946 was declared a Doctor of the Church.

In 1898, foreign missionaries had a statue of St. Anthony shipped from France to Trai Gao for the local people to seek his intercession.  But when they carried the statue to the present site, the statue became too heavy for them to move to the top of a hill as they planned.

They found the saint’s miracle and decided to place it there and built a wooden chapel. Bishop Hop raised the shrine to the diocesan pilgrimage center in Trai Gao in 2018.