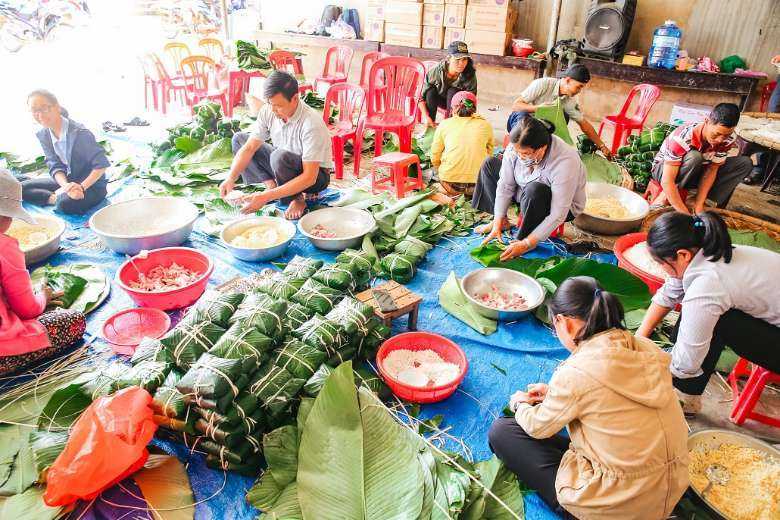 Catholics in Vietnam are speeding up provision of basic food to allow people badly affected by Covid-19 to celebrate the coming Lunar New Year holiday.

On Jan. 19, Caritas workers and parish council members from the parishes of Nhan Hoa and Xom Moi provided gifts for some 400 families whose members had died or lost jobs because of the pandemic, disabled people and street vendors regardless of their backgrounds.

They were given money, rice, cooking oil, fish sauce, sugar, cakes and other items worth 1 million dong (US$45). Those people could not afford to get food for the five-day traditional festival starting Feb. 1.

“We are really appreciative of the generous gift from local Catholics who sympathize with our family,” Mary Vu Thi Loi said, adding that all her family members had suffered Covid-19 and her daughter had been left with partial paralysis.

Earlier, Catholics from Hoa Hung Parish in Ho Chi Minh City offered 166 poor households traditional Tet foods such as sticky rice, pork sausages, confectionery, olive oil and spices. Volunteers visited and offered gifts to patients and those who are too weak to get gifts at the church.

We would have nothing to eat without the donation, so we are indebted to the parish for all their love and wholehearted support

Father Lam, 78, said feeding people in need for the national Tet festival is a practical way to connect with and share what they have with all people in living out the spirit of a synodal church.

Peter Vo Thanh Toan, who suffers paralyzed legs and uses a wheelchair to sell lottery tickets to support his family, said his family has been granted monthly food aid since last year to overcome the pandemic.

He said the donations were from funds run by Caritas in Ho Chi Minh City Archdiocese and the Catholic Bishops’ Conference of Vietnam.

The 50-year-old man from Vinh Hoa Parish said he and other 50 people, including nursery teachers who became unemployed due to the contagion, were also given Tet gifts.

“We are ecstatic to have food for the Tet traditional festival. We would have nothing to eat without the donation, so we are indebted to the parish for all their love and wholehearted support,” he said.

Many other parishes and religious congregations in the southern commercial hub are preparing basic food and other material support for people in need to hold the year’s largest traditional festival. Father Peter Huynh Phuc Hau, pastor of O Mon Parish in Can Tho, called on local people to make generous donations of food to poor people for the festival.

Noting that the pandemic was still affecting social activities, Father Hau encouraged people “to save your daily expenses up to help those who lack food, medicine and shelter.” He said their donations are precious and meaningful at this hard time.

Redemptorist Father Joseph Le Quang Uy, head of the Fiat Group whose members are youths who work for the common good, said the group plans to provide gifts for 100 people who are visually impaired in Dong Nai province on Jan. 23. They will be given food costing 350,000 dong each.

Most of the recipients struggle to make ends meet by selling lottery tickets.

Father Uy, who is active in charitable activities, said his group will also give food to 300 manual workers and farmers including Cham villagers in the provinces of Khanh Hoa and Ninh Thuan next week. A center with 400 patients with mental disorders in Lam Dong province will be given medicine and food. He said benefactors make donations to cover the cost.

This is our Tet gift to local people, especially children who suffer malnutrition and have to herd cattle and work hard in fields and forests

“As the Tet festival approaches, we try our best to bring gifts to people in dire need so that they can have joyous celebrations and strong determination to work for a better life in the coming year,” he said.

Mary Vu Phuong Hong Yen, a member of Heart in Hand, a group of Catholic volunteers inspired by local Salesians, said they will make banh chung or square glutinous rice cakes at a convent in Thu Duc City on Jan. 25. Group members and benefactors made donations.

“We will offer banh chung and other foods to migrant workers who work at traditional markets and construction sites and sell lottery tickets as a way to bring joy to them,” she said, adding that those people could not afford to give Tet food to their children during the festival when all commercial activities are suspended.

Banh chung, a Vietnamese traditional savory dish made from glutinous sticky rice and filled with mung bean and pork, is a typical food in every home during Tet and other traditional holidays.

Joseph Tran Minh Tuan, a member of a group of Catholic students, said he and his friends plan to offer bread machines costing 82 million dong to Loc Hoa Parish in Binh Phuoc province. The parish is home to the S’tieng people who have poor education and lack food around the year.

Tuan, 30, said the machines will operate next week and provide free bread to people.

“This is our Tet gift to local people, especially children who suffer malnutrition and have to herd cattle and work hard in fields and forests,” he said.

He hopes the bakery will create jobs for local people and inspire their children to work hard at school.