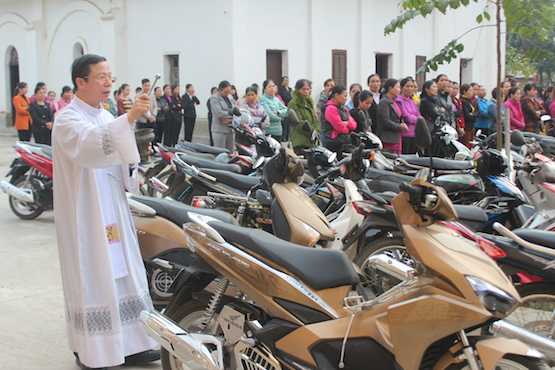 Catholics from a parish in northern Vietnam had their vehicles blessed during the country’s Lunar New Year festival as they seek divine protection on the road.

Father Joseph Nguyen Trong Duong blessed with holy water some 1,000 cars, trucks and motorcycles on Jan. 30 during a special Mass on the third day of Tet, the Lunar New Year festival.

"We beg God to bless our vehicles so that we can use them safely in the New Year," Father Duong, 48, told the congregation.

"I ask all Catholic drivers to be examples of how to drive carefully by consciously abiding by traffic laws, wearing helmets, and not drinking while driving to protect your lives and others," said Father Duong who is in charge of Vinh Quang parish.

Thomas Tran Binh Minh, a building materials trader, had three motorbikes, a car and a truck blessed during that Mass.

"We have peace of mind with blessed vehicles because we believe that God travels with us," Minh said.

Minh said that last year he saw five road accidents that killed four people and seriously injured five more. Most of the drivers, he said, were not locals and had been drinking alcohol. Some of the motorcycles brought to Vinh Quang Church to be blessed. (Photo by Joseph Nguyen)

Joseph Tran Minh Nhu, 94, said he has brought his bicycle to the church for blessing on Tet for the past five years. "I am old but still ride the bicycle around the village every day for exercise. God protects me from accidents," he said.

The event also aimed to raise public awareness of traffic safety during the holiday season. The National Traffic Safety Committee recorded 86 dead and 137 injured by traffic accidents in the country during the first three days of Tet.

As part of an effort at inculturation, the Catholic Church in Vietnam observes Tet's first day for the peace and prosperity of the nation, the second day for ancestors and the third day for jobs.